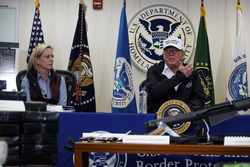 The New York Times threw cold water on the suppositions of anti-Trump media figures and politicians this week in an ominous story headlined “Border at the ‘Breaking Point.’” For months, I have been jousting on television with various border “flat-earthers” who insist there is no crisis, simply because President Trump says there is.  For these never-Trump zealots, opposing the president always and everywhere precludes actual analysis of the dangerous border situation and even supersedes the immediacy of protecting American citizens.

For example, describing Trump’s Oval Office speech about the border situation in January, MSNBC host Nicolle Wallace opined: “The big scam of the whole address was that there’s a crisis; there is no crisis.”  Wallace’s colleague Joe Scarborough condescendingly asked, “How stupid are Americans who still believe there’s a crisis on the southern border?”  Liberal politicians similarly objected, with Speaker Nancy Pelosi admonishing the president to “stop manufacturing a crisis” and DNC Chairman Tom Perez asserting that “no crisis exists and anyone making the argument is most likely guilty of fear-mongering.”

These media and political elites, mostly ensconced in TV studios and guarded offices in New York and Washington, long ignored the grave attestations of actual on-the-ground law enforcement about the perilous, porous border. For example, Customs and Border Protection agent Fernando Grijalva  reported to CBS News in January that “I’ve seen six different presidents the time I’ve been with the Border Patrol, and this is the worst crisis I’ve seen.”  Agent Grijalva also argued for the wall, stating, “Operationally I can tell you that without a physical barrier, the Border Patrol, we have a very tough time.”

That long-promised wall finally will be built, thanks to President Trump’s insistence via executive order.  But while the wall will become a very useful tool in defending America in years to come, this proximate crisis requires nimble and immediate further action.  The president must declare an additional emergency under his explicit powers granted in the National Emergencies Act of 1976 and suspend immediately our practice of accepting all illegal border crossers who subsequently claim asylum.

Why an additional declaration and why now?  Because the wall will take years to complete, and Central American migrants now pour into our country illegally, fully cognizant that under U.S. law, unlike illegal immigrants from Mexico, they cannot be immediately repatriated.  Moreover, if they claim asylum, they are guaranteed months, even years, of legal residency in the United States, often far into the interior of the country, and cared-for at taxpayer expense.

America boasts a proud history granting asylum to oppressed people, from Jews fleeing the Nazis to Cuban dissidents escaping Castro.  Both in precedence and in U.S. law, asylum applies to people fleeing persecution because of “race, religion, nationality … or political opinion.” Asylum status has never been afforded to economic migrants.  After all, hundreds of millions of people throughout the world understandably want the opportunities and freedoms our great land affords, but they rightly are not considered asylum seekers.  In fact, Secretary of Homeland Security Kirstjen Nielsen noted that, of applicants from Central America, “90 percent are not eligible” when federal judges rule on their cases.

Given that tens of thousands of illegal migrants abuse and game our generous asylum practices presently, with likely hundreds of thousands more in queue, President Trump should act swiftly and decisively.  Such a bold move would not only help secure our homeland but would also pay political dividends.  For example, Trump would prove his seriousness to many of us who bristled at his signature on the massive omnibus February spending bill that included some harsh limitations on illegal immigration enforcement.  In addition, polling suggests that the preponderance of Americans favor much more stringent action against immigration illegality.  For example, in the 2018 Economist/YouGov poll, only 20 percent of Hispanic citizens support the present practice of “catch and release” of families crossing illegally.

With even the New York Times conceding that our border stands at a “breaking point,” our commander-in-chief should use his clearly enumerated powers to reclaim the sovereignty that this nation deserves. Such a move would also highlight the extremism of the Democratic Party, which lurches left and advocates for de facto open-border policies including the elimination of ICE and broad amnesties.  Border issues largely vaulted candidate Trump to victory in 2016, and decisive action now to secure our national and economic security can similarly ensure his second electoral triumph in 2020.

Steve Cortes is a contributor to RealClearPolitics and a CNN  political commentator. His Twitter handle is @CortesSteve.

Share This Post
Like it? Vote it up!
00
Previous ArticleIllegal Accused of Murdering Mollie Tibbetts Wants Confession Thrown OutNext ArticleNo, There Is No Empowerment To Be Found in Period Blood Displays
You May Also Like
Iran Dismisses Trump’s ‘Genocidal Taunts,’ Blames U.S. for Regional Instability
May 22, 2019

If You Work for Trump, Expect to Be ‘Thrown Under Bus’
May 13, 2019
Missouri Senate Approves Omnibus Pro-Life Bill Declaring State ‘Sanctuary of Life’
May 17, 2019
Ben & Jerry’s ‘Israel-Obsessed’ Boycott Met with Swift Backlash
July 19, 2021
What Is Attorney General Barr Trying to Hide?
April 5, 2019

No, There Is No Empowerment To Be Found in Period Blood Displays

Why would women need any marked ritual to celebrate our monthly curse if we are already perfect? Gross! A 26-year-old California sex coach who goes by Demetra Nyx splattered pictures of herself smeared with menstrual blood all over Instagram to celebrate her “beautiful and powerful” periods. She said: I used to spend my

The illegal alien charged with murdering 20-year-old college student Mollie Tibbetts is asking that his confession be thrown out of the case. In August 2018, Bahena-Rivera, an illegal alien from Mexico, was charged with Tibbetts’ murder after police said he admitted to confronting and chasing down the young woman after her body was found in