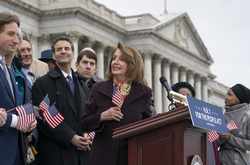 The nation’s top elected Democrat, House Speaker Nancy Pelosi, has now declared publicly that her party will not impeach President Trump. In a lengthy Washington Post interview published Monday, Pelosi left the door slightly ajar, saying her decision could change if  “compelling” new evidence emerged. Still, hers was a significant announcement, signaling a major change in the party’s trajectory.

Why did Pelosi make the decision? Why now? What are the benefits and perils for her party and for Pelosi’s leadership?

The longtime congresswoman is a savvy strategist, and her decision was purely strategic. She made no apology for two years of unproven charges, no admission her party had been fundamentally wrong in its most basic and vocal claim since the 2016 election: that Donald Trump is not the legitimate president of the United States. He is illegitimate, they charge, because the election itself was tilted by Russia. The most incendiary charge is that Trump worked with the Russians to rig the results.

No one doubts that the Russians tried to interfere. They are a geopolitical enemy, eager to cause chaos and confusion. But questions arise regarding (1) what impact the Russians had (the consensus is “not much”) and (2) whether the Trump campaign cooperated with them. If Trump worked directly with a foreign adversary to undermine our Constitution, he does not deserve to be president. That was the main reason Robert Mueller was appointed as special counsel, to probe Russian interference and possible collusion with the Trump campaign.

Now, Pelosi is effectively saying, “Never mind.” She did so quietly, with no comment on the powerful charges her party has made against Trump. That’s too easy. What’s her explanation for backing off the incendiary charges? After all, if those charges are true, they should lead to impeachment.

Instead, Pelosi simply said, “He is not worth it.” What she meant, as she implied elsewhere in the interview, is that impeachment is not worth it to her party. She knows the proceedings would soak up all of the House’s time, dominate the media, and then fail in the Senate. Every Democratic presidential candidate would have to take a public stand on it, and the activist base would demand they support it.

Those stances might well be fatal in November 2020. Although impeachment is a big winner with Democratic primary voters, it’s a big loser with the larger electorate. Before turning an elected president out of office, most voters want clear and convincing evidence of “high crimes and misdemeanors.” Pelosi knows that, and she knows the Republicans lost public support when they tried to impeach Bill Clinton for lying under oath. She lived through that (she was elected to Congress in 1987), and she learned from it.

Why did Pelosi make her statement now? For two reasons: To get ahead of the Mueller report and to regain control of her caucus.

The special counsel’s report, which should be handed to Attorney General Bill Barr soon, is almost certain to present no evidence of coordination between the Trump campaign and the Russians. If there were any hard evidence, it would have already appeared in indictments and sentencing recommendations. It hasn’t.

The Democrats must share that expectation. After shouting for two years about “Trump-Russia Collusion,” they have pivoted and begun muttering about “obstruction of justice.” We still don’t know if the Mueller investigation will present any evidence of the latter. Unless there is something big there, the Democrats will need to explain their “collusion delusion,” not to their activist base, but to the wider public, especially persuadable independent voters.

Pelosi was also seeking to regain control of her caucus. Its surging left-wing and headstrong committee chairs are determined to push forward on impeachment, and to do so without any direction from Pelosi or her deputy, Steny Hoyer. She has decided to confront them now, both to demonstrate her control and to ensure Democrats retain control of the House in 2020.

The debacle within her caucus over Ilhan Omar’s repeated anti-Semitic remarks shows how fragile Pelosi’s hold is. Passing a straightforward resolution against anti-Semitism should have been easy, even if there was no stomach for calling out Omar by name. Yet it proved impossible. The left blocked it. To pass anything, the leadership had to include the obligatory swipe at Trump, along with a laundry list of other groups facing bigotry charges. The result was a resolution so vacuous that Omar herself called it a victory.

Pelosi is also trying to rein in powerful committee chairs, specifically Jerrold Nadler (Judiciary Committee) and Adam Schiff (Intelligence Committee), who are directing massive investigations clearly aimed at impeachment and inflicting personal damage on the president. Reps. Omar, Alexandria Ocasio-Cortez, Rashida Tlaib and others on the left want the president in the dock now. But voters will reasonably ask, “How is this helping the country? How is this leading to good legislation? Isn’t this just partisan harassment?”

If Mueller’s report offers little ammunition for further investigation, then the Democrats will feel the backlash for two years of overheated, misdirected rhetoric. Revving up more high-profile investigations will only compound the problem. Pelosi knows that, and she knows she is House speaker only because the Democrats won a lot of “purple” seats in 2018 with centrist candidates like Conor Lamb of Pennsylvania.

If she leads these Lambs to the slaughter, she’s out of a job, and her party is out of power. That’s why she is trying to head off a serious congressional move to impeach the president.

Charles Lipson is the Peter B. Ritzma Professor of Political Science Emeritus at the University of Chicago, where he is founding director of PIPES, the Program on International Politics, Economics, and Security. He can be reached at charles.lipson@gmail.com.

If Michael Doran Were on Wall Street, He’d Be a Billionaire
November 2, 2019

The Black Gun Owner Next Door

Tiya Miles, New York TimesI’m an African-American historian and, on most issues, decidedly liberal. Could I rethink my anti-gun stance? Source link

“You won’t serve me because I’m wearing my hat, right?” Jake’s Dilemma, a bar on the Upper West Side in New York City, has disciplined a bartender who refused service to Dion Cini since he wore a MAGA hat. From NBC New York: He said a female bartender had been serving him,