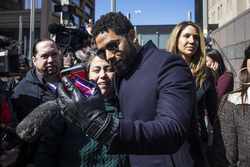 The extraordinary coincidence of Donald Trump and Jussie Smollett both being “cleared” of significant “crimes” last week provides a remarkable vantage point for asking “What if everything you know is fake?”

That’s the subtitle of my new book, “The Media Matrix,” which is an attack on what the president calls Fake News, but more importantly a recurring question about whether any of us is smart enough to penetrate the disinformation campaign being waged 24/7 by not just the mainstream media, but also by the “information technology” that has become the very environment in which we live. That includes the internet, social media, Wikipedia, Google, cable news, late-night comedy, talking heads, Hollyweird and, yes, the morning newspaper.

The ability to discern what we used to quaintly call “truth” from out of the information matrix that surrounds us is undoubtedly the primary survival characteristic of the next generation. With so many competing and contradictory sources of information — and an education system that devalues logic and critical thinking in favor of political correctness — only the most persistent and skeptical news consumers can be confident that they have an understanding that approximates “truth.”

That’s where the stories of Donald Trump and Jussie Smollett become instructive counterweights at either end of the Media Matrix. On one hand, we have a two-year investigation into whether the president of the United States “colluded” with Russia to steal an election. On the other hand, we have a two-month investigation into whether a Hollywood actor “colluded” with two Nigerian brothers to manufacture a hate crime against himself. In one case we had a supposed criminal who was really a victim, and in the other case we had an apparent victim who was really a criminal. And in both cases, we the people were being fed “facts” that added up to plausible narratives that exploded and left us asking, like Pilate, “What is truth?”

Last week, we were told by Attorney General William Barr that Special Counsel Robert Mueller’s investigation against Trump had found no collusion with Russia. This should have come as no surprise to anyone who had the ability to filter out the blathering background noise of the heads that are paid to talk incessantly. Certainly, even for the most gullible of news consumers, the revelation in October 2017 that Hillary Clinton had paid for the so-called Steele Dossier of Russian-supplied dirt should have steered the story from “What did Donald Trump do?” to “What did Hillary Clinton do?” For many of us, it was the final nail in the coffin of the Russia hoax, but not for the major media, not for the Democrats in Congress, not for Mueller himself.

The insistence on sticking with a false narrative when the evidence overwhelmingly points the other way is a symptom of delusion, which is what Trump has dubbed the Russia collusion hoax. That describes an overwhelming percentage of the media who ought, by dint of their profession’s alleged standards, to have known better.

But the situation for consumers of news is different. In their case, you have to consider that sticking with the facts in the face of overwhelming insistence on a false narrative by the media and your peers takes extraordinary courage. Confronted with a cognitive dissonance between what you perceive to be true and what everyone else tells you to be true, it is psychologically predictable that most people will choose to reduce their stress by going along with the crowd. That has been the case for the majority of Americans over the last two years as they have been continually assured by “respected” voices that Trump is guilty.

The opposite situation prevailed in the hate crime of Jussie Smollett. Here, we had a horrible attack that made Trump supporters look like monsters. The “Empire” actor told a convincing story about being assaulted at 2 a.m. in frigid Chicago by two white men shouting pro-Trump slogans and apparently targeting Smollett because he was gay, black and proud. No one who is a caring, compassionate human being could hear that story without worrying about the forces at work in our country that are tearing us apart. Day after day, the media assured us, it was the fault of people like me — Trump supporters, white people, irredeemable deplorables — that violence was being done upon the helpless (even if in this case the helpless person was a rich, well-connected Hollywood actor).

But wait, something was peeking through the matrix. Something like the ghost in “Hamlet” was stalking us and trying to tell us something — if only we would listen. “Something is rotten in the city of Chicago,” a modern Marcellus might declaim, and we could well believe that some evil has been done there, but like Hamlet we would be loath to surrender to conspiracy theories and accept the evidence of our own eyes. Nonetheless, to mix a Shakespearean metaphor, we learn bit by bit that the story of the Chicago actor was nothing more than a tale told by a social justice warrior, full of sound and fury, signifying nothing. He invented the entire plot, hired two hulking black men to portray white racists, sent them off to purchase the props to be used in the fake lynching, and then employed his magisterial acting ability to cry on cue when being interviewed by Robin Roberts about the maudlin play within the play.

Of course, after the audience discovers that they have been manipulated into believing the hate hoax, they naturally crave justice for the hoaxer — they demand and expect him to pay the price not just for the audacity of his hoax, but for pulling it off — for fooling not just the police but we the people as well. Then in the final twist, close to the end of the fifth act, the rug is pulled out from under us one last time. The charges of faking a hate crime are dropped, and the actor is restored to his former glory as if nothing had ever happened. “What is truth?” the prosecutor asks as she washes her hands of the whole shameful episode.

But after what happened to Trump, what happened to Smollett, what happened to Covington student Nick Sandmann when he had his name and his MAGA hat dragged through the mud, the question now should be, “What if everything you know is fake?” Unfortunately, when you put that question to Siri or Alexa or Google, there is no answer but an eerie electronic silence. If you want to know the truth, you will have to find it on your own.

Frank Miele, the retired editor of the Daily Inter Lake in Kalispell Mont., is a columnist for RealClearPolitics. His new book — “The Media Matrix: What If Everything You Know Is Fake” — is available at Amazon. Visit him at HeartlandDiaryUSA.com to read his daily commentary or follow him on Facebook @HeartlandDiaryUSA or on Twitter @HeartlandDiary.

Share This Post
Like it? Vote it up!
00
Previous ArticleNot On My WatchNext ArticleThere is always a bright side
You May Also Like
‘Black People Are Not Owned by the Left’
April 9, 2019
Actor Albert Brooks Compares John Voight to John Wilkes Booth
May 26, 2019
Joe Biden: Grandson Asked Him About Internet Meme Accusing Him of Molesting a Child
May 7, 2019
Strategic Thinking for Parents Who Oppose CRT in Schools
August 3, 2021

There is always a bright side

Not On My Watch