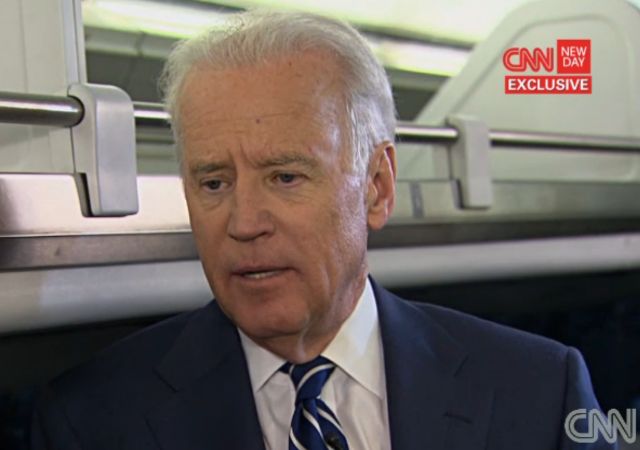 The polls say one thing, but Democratic voters and operatives willing to go on the record say something different. So will Biden run or won’t he?

Former VP Joe Biden hasn’t announced yet whether or not he’ll jump in as a 2020 presidential candidate, but a growing number of voices are giving him some unsolicited advice: Don’t.

About a month ago, we learned via the McClatchy news outlet about over two dozen Democratic strategists whose opinions on a possible Biden run weren’t exactly glowing. “Not his time” was a common theme among those interviewed.

And just this week, a CNN focus group of Democratic voters echoed the sentiment expressed by the strategists:

The Democrats gathered by CNN, however, said they weren’t interested in Biden. Some said they wanted a candidate who was further to the left.

“I think we need a bold, strong leadership, and you’ll find that in the progressives,” Democratic voter Carol Evans said.

“We had the standard-bearer for the kind of pragmatic centrist candidate in Hillary Clinton in 2016 and Donald Trump is now president. He is not your average political candidate, so we really need to try to think outside the box because, you know, it seems like the dude is made of rubber. Anything you throw at him just bounces off, there’s nothing that sticks,” said focus group member Michael Milisits.

Another Democratic voter in the group, Russell Banks, said Biden “really comes from kinda the good ol’ boy politics from the past.”

Watch the voters talk about a potential Biden candidacy in the video clip below:

Alisyn Camerota asked a panel of six Democrats, “How many of you would like to see Joe Biden get in? Show of hands.”

No one raised their hands.

Other liberal voices are throwing cold water in Biden’s direction, too.

The Huffington Post‘s Jack Carter did an in-depth piece Tuesday explaining how, in his view, Biden was his own worst enemy because the modern Democratic voter “has moved on from his brand of politics.”

Actress Cynthia Nixon, who ran a losing campaign against New York Governor Andrew Cuomo last year, slammed Biden in an opinion piece published by the Washington Post Saturday. Specifically, she took issue with recent remarks made by Biden about the “decency” of Vice President Mike Pence, who gay and lesbian progressives like Nixon vigorously oppose.

She didn’t mention in her piece that Biden endorsed Cuomo over her in that bruising 2018 Democratic primary battle, which may have something to do with how she feels about the former veep now.

In spite of all the “will he or won’t he” speculation, and the negative feedback we’ve been reading from other Democrats about him taking another shot at the Oval Office, Joe Biden’s Real Clear Politics polling averages remain high. He currently leads the pack of Democrats who have either already declared their candidacies or who are expected to (like Beto O’Rourke).

Biden said recently that his family was on board with him running. He’s also rumored to be signing on some pretty big names in anticipation of making a formal announcement soon.

If he does, from the perspective of a conservative outsider looking in it will be fascinating to watch the battle for the future of the Democratic party play out in real time between the party’s establishment liberals and their emerging socialist wing.

— Stacey Matthews has also written under the pseudonym “Sister Toldjah” and can be reached via Twitter. —

“Truth told, I have to! Because under the terms of my contract, I have to host Jeopardy! for three more years! So help me. Keep the faith and we’ll win. We’ll get it done,” he continued. Trebek, who has hosted Jeopardy! since 1984, renewed his contract through 2022. In 2017, the 78-year-old underwent brain surgery

Madeline Osburn, The FederalistJames Clapper faced no charges from Obama's FBI for lying under oath, and as a private citizen, he gets paid to spin his own crimes on television. Source link