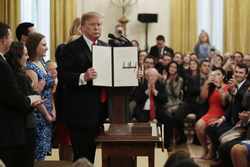 This week, the Trump administration brought America’s attention to a longstanding problem plaguing college campuses: the left’s sustained assault on free speech. Across the country, far too many conservative students are undermined, silenced, and even physically attacked as a result of the toxic culture on our campuses today.

Abigail, a former RNC intern, experienced this firsthand. Late last year, she reached out to Professor Christine Fair at Georgetown University for comment on Fair’s tweet that white men “deserve miserable deaths” and “we should castrate their corpses and feed them to swine.”

Fair responded by doubling down on her reprehensible language and harassing Abigail in a long rant online, calling her complicit in an effort to “protect male privilege” and wage a war against women. Unfortunately, it is no longer surprising that an academic in charge of teaching our next generation of leaders could find this appropriate.

This week, President Trump signed an executive order to withhold federal research funding from universities that fail to support free speech on campus. When he announced the move during his CPAC address, the president highlighted Hayden Williams, a student who was physically attacked because he recruited for a conservative organization while on the campus of the University of California, Berkeley.

Universities across America take in tens of billions of federal dollars in research funding every year. The president’s executive order is an important step toward enforcing what these universities should have been doing all along: promoting free speech and encouraging diversity of thought as they conduct their research.

Professors seem to have little concern for students who may disagree with their views. They rail against President Trump, Republicans and the conservative movement as they teach, sending a clear message that other political views are not welcome in their classroom. They espouse “safe spaces” but create a hostile environment for conservative students.

This toxic culture comes at a cost. It stifles free expression and critical thinking. It encourages students to tailor their work to the views of their instructors. It eliminates the debates and discourse that have always been a critical part of the college experience.

Students go to college to broaden their perspectives and deepen their knowledge of the world. Instead, they face an environment in which they are expected to fall in line with the liberal narrative – or else. Look at the violent mobs that continue to drive away conservative speakers to prevent diversity of thought from infiltrating their bubble. In 2017, hundreds of people protested conservative commentator Ben Shapiro’s appearance at UC Berkeley, and several were arrested as the crowd turned violent.

Prominent conservatives continue to be protested, barred or disinvited from speaking on campus – even Republican members of Congress. And when the mobs fail to derail the events, protesters try to de-platform them instead. Speakers have been forced to spend hundreds of thousands of dollars for security, all because they dare to publicly express ideas that differ from those of some students, professors and school administrators.

This is devastating to our higher education system. It cheats our nation’s young people out of a meaningful college experience and renders them unprepared for the working world. That’s why President Trump is committed to holding American universities accountable. As he said during Thursday’s signing ceremony, “People who are confident in their beliefs do not censor others. They welcome free, fair and open debate.”

With this new executive order, the administration is making it clear that federal dollars will only go to institutions that are equally committed to upholding an inalienable, constitutional right: the right to freedom of speech for every single American. Our students are our future, and we owe it to them to set them up for success.

Ronna McDaniel is chairwoman of the Republican National Committee.

Share This Post
Like it? Vote it up!
00
Previous ArticleHold That Fart…Next ArticlePope and President Unite in Support for Persons with Down Syndrome
You May Also Like
Suspect Tosses Molotov Cocktail into Florida DHS Facility
August 31, 2019

The Insanity of Missouri's Gun Laws
August 20, 2019
Hassan Rouhani | Iranian Nuclear Program
April 13, 2019
Why Everything They Say About the Amazon Is Wrong
August 27, 2019
Why the Left Can't Understand Tucker Carlson
April 7, 2019
Tucker Carlson: What Was Julian Assange’s Crime? He Embarrassed Everyone In Power, Humiliated Hillary Clinton | Video
April 13, 2019

Pope and President Unite in Support for Persons with Down Syndrome

Both President Trump and Pope Francis tweeted out support for persons with Down syndrome Wednesday, while also condemning the practice of aborting them before they are born. Source link