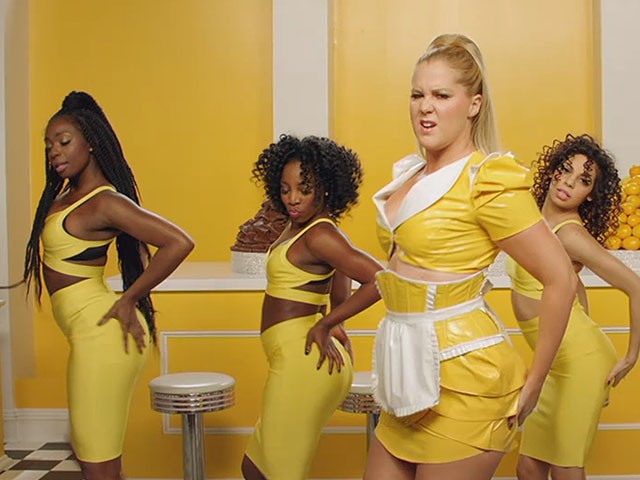 A new report reveals that left-wing Hollywood stars like Amy Schumer are being flat-out rejected by New York City waitresses over a pending minimum wage increase the workers believe will hurt more than help.

In a New York Times article titled, “Amy Schumer, Amy Poehler and Other Stars Stand Up for Waitresses. The Response: No, Thanks.,” it’s revealed that stars are pushing for New York State’s minimum wage law to apply to service industry workers who rely on tips to make a living.
The group of female actresses-turned-activists, which also includes Sarah Jessica Parker and Michelle Williams, are pushing for this change as they believe it would reduce sexual harassment in the workplace.

But the Times piece reports that working women in New York would rather have the Hollywood elites “butt out.”

“The resounding message from servers in New York to these actresses in Hollywood is to just leave us alone,” said Maggie Raczynski, a bartender at an Outback Steakhouse in upstate New York. “These celebrities have literally no idea. I feel like they need to butt out.”

An aspiring young actress who has worked as a waitress in a Manhattan restaurant for the last three years said she worried that restaurants would raise menu prices and switch to a nontipping model if they had to pay servers $15 an hour. The actress, who just landed a role in an independent horror film but declined to be identified to avoid upsetting her employer, said she would not continue as a waitress without the chance to earn tips.

Indeed, when tips are factored in, many servers earn far more than the minimum wage of $11.10 in New York State, or $15 in New York City.

Other Hollywood stars have gotten in on the cause, including actresses Natalie Portman and Debra Messing, who recently signed a letter calling for minimum wage to apply to waiters and waitresses.

“A subminimum wage for a predominantly female workforce is linked to high rates of sexual harassment in the restaurant industry and prevents thousands of working women from achieving economic security,” their letter read in part.

A group of hundreds of servers across New York and other states responded by signing a letter from the Restaurant Workers of America which rebuffs the stars’ offer for “help.”

“To the celebrity women who recently criticized the full-service restaurant industry, from over 500
women and men who work in it: Thank you for your concern. But we don’t need your help, and we’re
not asking to be saved,” the letter states.

The letter also calls out Hollywood for their own sexual harassment problem.

“Bad behavior happens in every industry—Hollywood celebrities should know better than most that
sexual harassment happens everywhere. The people who are pushing for this change in the restaurant
industry are exploiting the isolated stories of people that have suffered injustices, and making it out
to be the industry’s or the tipping system’s fault. That is just not true.”

“We respect your profession, and now it’s time for you to respect ours,” the letter concludes.

Media Should Admit They Got Far Out Over Their Skis
April 18, 2019
Democrat Lawmaker: I'm Sick of 'Sex-Starved Males' Talking About Abortion
June 13, 2019

Climate Strike All About Indoctrination, Not Science
September 20, 2019

Chicago needs a full explanation for why prosecutors dropped charges against TV actor Jussie Smollett, accused of fabricating a hate crime to benefit his career. That explanation should come from the person most accountable for the actions of the Cook County state's attorney's office — Kim Foxx.Read Full Article » Source