Why would women need any marked ritual to celebrate our monthly curse if we are already perfect?

Gross! A 26-year-old California sex coach who goes by Demetra Nyx splattered pictures of herself smeared with menstrual blood all over Instagram to celebrate her “beautiful and powerful” periods.

I used to spend my time worrying about what other people thought of me… And yet. It turns out none of that was ever necessary.  I don’t do anything I do now for anyone’s approval…

Because what I have gained on this journey, finally, is the deepest love and total approval of my Self.
What if you deeply, truly loved and *approved* of yourself?

That is why I post my blood. It is a little to liberate other women and a lot to please my Self.
I get so much pleasure from this ritual and I love feeling so free to share it and I love not caring what the reactions will be. 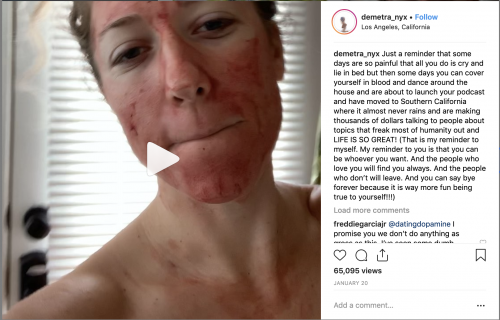 She is not a lone Millennial seeking to express her feminism through the display of a normal body function.  It’s a bit of a trend now.  For example, the iPhone will soon debut the very necessary period emoji. A book club in the UK is hosting “period poverty charity Bloody Big Brunch” on March 3rd, during which it will be serving Red Velvet “period” pancakes garnished with tampon macaroons.  I think I’m skipping lunch today.  Dinner, too.

The saddest thing about this trend is not even that it’s gross, but that it’s derivative.  It’s Anthropology 202 mixed with punk rock, mixed with Sandra Fluke.

We all remember Sandra Fluke, right? She’s the character who, in the Obama days, testified before Congress that 40% of the female Georgetown Law students suffer financial hardship because they have to provide for their own birth control and that she herself spends $3000 a year on contraception.  That left rational observers scratching their heads: how did she manage to run up that bill?  The pill is $10 a month, and condoms are, what, 50 cents?

Nevertheless, a whole generation of female social justice warriors launched to fight the grand injustice of having to pay that $10.  Period poverty became a thing, too, even though it’s common for an American household to have a fixture known as a coin jar.  So, if a cis girl discovers that her valet is somehow empty, she can dig out two quarters, head to the nearest public restroom, and purchase a pad or a tampon.

In the 1990s, Eve Ensler’s Vagina Monologues recruited young women willing to speak frankly about their bodies and sexuality.  Ensler, however, was a late adopter.  It all had started twenty years earlier with women in punk.  These punk rockers sought to shock the establishment with elaborate displays of depravity.  Some of their experiments, like wearing swastikas, were quickly disavowed, thank you very much.  Others lingered a little longer.  Young women in that scene quickly discovered their own unique ways of being gross.  I’m going to spare readers the details of that empowerment, male and female.  It’s really not that interesting.

How did anyone get the idea that menstrual blood is empowering, though? That’s Anthropology gone awry.  A girl’s coming of age is marked naturally with the onset of menses.  Boys, on the other hand, have the need to mimic the female coming of age and inflict various atrocities on each other in rite of passage ceremonies.  They may even brag about it in their high school yearbooks a la Brett Kavanaugh.  Boys will be boys.

That’s Anthropology 101; so far so good.  Anthropology 202 is when gals decide to reclaim the original creative power for the matriarchy and while imitating the young men and their customs take special care to celebrate the menses.  The problem with that line of thought is logic.  Why would women need any marked ritual to celebrate our monthly curse if we are already perfect?  Let men drink each other to death and dive into mosh pits.

Yet today some overeager moms pledge to embarrass their daughters with red velvet cakes for their first period or some other wholly made up tradition.  I’m highly suspicious of traditions derived from sociological theories, especially if the theory is on shaky grounds to begin with.  I generally prefer theories based on observations of human behavior, not the other way around, but, I guess, to each his own.

Through most of human history, the period was a relatively rare event in a woman’s life.  Women were often too malnourished, or pregnant, or breastfeeding to experience it on a monthly basis.  It really was an extraordinary phenomenon.  If we didn’t develop a way to celebrate periods when they were rare, why start now, when it’s but a common inconvenience?

And who celebrates them anyway? Childless women in their prime who probably never plan on having babies.  Fertility is still a sign of youth, and youth comes with beauty. Regardless of her stated goal, the lady making a ritual (her word) of writing words on their skin with menstrual blood seem to be making a point of wasting both.

The only reason we are talking about it now is that social media airs out the worst ideas.  The ideas themselves are not new; Millennials, you need to work harder.  What’s new is the degree of narcissism that goes into that cultural production.

Though Democrats claim they are protecting criticism of Israel, Ilhan Omar's target was not Israel, but the American Jewish community. Source link

Why Trump Must Declare a Second Border Emergency

The New York Times threw cold water on the suppositions of anti-Trump media figures and politicians this week in an ominous story headlined “Border at the ‘Breaking Point.’” For months, I have been jousting on television with various border “flat-earthers” who insist there is no crisis, simply because President Trump