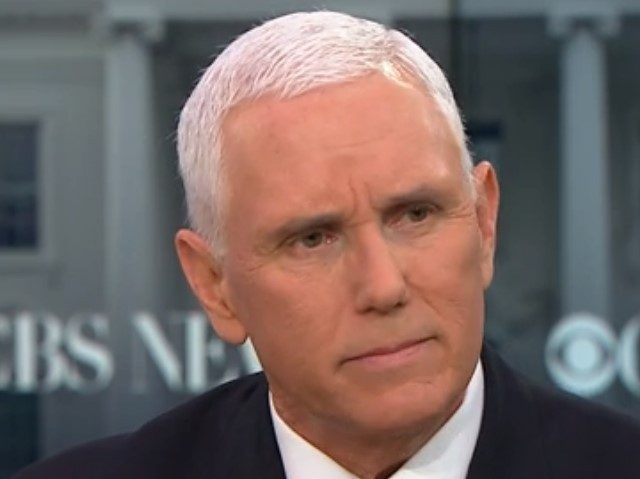 Vice President Mike Pence met with the families of Citgo workers imprisoned in Venezuela on Tuesday, where he called on socialist dictator Nicolás Maduro to release them from prison.

The executives were arrested by the Maduro regime in Caracas back in November 2017 as they were attending corporate meetings at Citgo, a U.S. energy refiner owned by state-run PDVSA that faces allegations of embezzlement and money laundering.

A White House official said in a statement that Pence reiterated the Trump administration’s “deep concern for the welfare and safety of all wrongfully detained American citizens and he will call on Maduro to release all political prisoners immediately and unconditionally.”

“November 2017, at a Citgo meeting in Caracas, Maduro’s regime arrested six men: five American citizens and a legal permanent resident,” Pence said in his remarks. “They’re still being held to this day.”

“It’s important that the media know that the Maduro regime has denied repeated efforts by these families to meet with their loved ones,” he continued. ” They’ve canceled 16 separate court hearings.  Nicolás Maduro is a dictator with no legitimate claim to power, and Nicolás Maduro must go. Nicolás Maduro has suspended due process and the rule of law.  And these six families and their loved ones are a testament to the brutality of this regime.”

To the families of the Citgo 6: We will stand with you until your families are free and until Venezuela is free. To Nicholas Maduro — let our people go — then go! #VenezuelaLibre pic.twitter.com/FKhvLbR2A3

According to Pence, the men have also been “deprived of food and medicine and are now suffering severe health problems,” with the harsh conditions in Venezuelan prisons only worsened by the country’s ongoing economic and humanitarian crisis.

The Trump administration has stepped up its efforts in recent months to remove Nicolás Maduro’s socialist dictatorship from power, mainly through the imposition of sanctions against the country’s state-owned oil company PDSVA and against senior regime officials.

Share This Post
Like it? Vote it up!
00
Previous ArticleThe media is just like the citizens of RockridgeNext ArticleFields v Speaker–CPCF et al amici brief (003)
You May Also Like
2020 Election Will Be The Squad v. The Mob
July 19, 2019
Mr. President Close The Border
March 31, 2019
UK PM May Hails Trump for Strengthening NATO Alliance
June 4, 2019

The media is just like the citizens of Rockridge