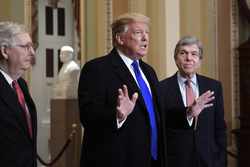 WASHINGTON — Fortunately for the republic, President Trump and his minions can’t even do an end-zone dance right. And their celebration, by the way, is wildly premature.

You would think that in light of Attorney General William Barr’s letter — which reduced special counsel Robert Mueller’s investigation into four pages of pro-Trump messaging — the president’s defenders would want a free run at spinning, cheering, distorting and attacking. How could they give up the chance to shout the words “No collusion!” as loudly and as often as they pleased?

For the first 24 hours, they did a pretty good job. It was astonishing how many sweeping conclusions were drawn about a report that no one outside of Barr’s and Mueller’s inner circle has seen. Trump’s adversaries were told to fold up their tents. Reporters who have done the hard work of unearthing the truth about Trump were denounced. A president whose approval ratings have been dismal from the start was said to be on the road to re-election.

Trump’s apologists even had the nerve to continue belittling Mueller (Rudy Giuliani called him “pathetic” for not making a call about obstruction of justice), even though their partying was premised entirely on what Mueller was quoted as saying.

But the Trump administration really is as incompetent and mean-spirited as its foes say it is. And so it emerged that the Trump Justice Department filed a court document in support of a right-wing judge’s wild ruling that the entire Affordable Care Act should be killed. Dead. Kaput. Twenty million people or so losing health coverage. Over 100 million losing protections for pre-existing conditions.

Suddenly, the Democrats were back in business. House Speaker Nancy Pelosi not only denounced Trump’s irresponsibility but also touted a Democratic proposal to strengthen, not weaken, the Affordable Care Act. Once again, Trump brought Democrats together. The Dems have their differences about single-payer health care, but they sure don’t want Trump wrenching insurance from those who got it though Obamacare.

By the way, we just had an election in which voters told the exit pollsters that health care was by far the No. 1 issue — 41 percent listed it, well ahead of immigration, which came in at No. 2 with 23 percent. And 75 percent of health care voters supported Democrats in House races. In Pelosi’s circle, happy days are here again.

Of course, Trump’s foes would have liked Mueller to decide unambiguously against Trump on everything. But the cautious Mueller was always unlikely to get there. The bottom line: Freeing our country from the clutches of Trumpism was always going to require a broad popular consensus. Democracy and elections remain the best ways to create it.

At the same time, Trump’s critics need to resist the intimidation that will be brought to bear in the period between now and when Barr releases whatever he is willing to put out from Mueller’s report.

They cannot let the spin cycle wash away everything we have learned about all the contacts between Trump’s campaign and various well-connected Russians. Or about this most basic fact: the Russians interfered in our election to help elect Trump.

They cannot let Republicans, who devoted such energy under President Obama on harebrained investigations, now tell House Democrats that accountability is off the table for the next 20 months. They cannot fall silent as the press is denounced (sometimes, sadly, from members of the media) for publishing stories about Trump that were 100 percent true.

And they cannot let Barr off the hook for not leaving it to Congress to decide whether Mueller’s discoveries add up to obstruction or not. There is now excellent reason to believe that Trump chose Barr as attorney general because of Barr’s 19-page memo from 2018 in which Mueller’s future boss criticized the special counsel’s pursuit of obstruction in the first place. Barr was never going to find Trump guilty of obstruction, and he seemed eager to stop Congress from doing so. No wonder Trump was quoted this week as telling GOP senators of Barr, “I love this guy.”

And Trump’s critics cannot stop demanding the release of the full Mueller report and the information that underlies it as quickly as possible. The public can’t be asked to rely on what amounts to a Trump administration press release to make its judgments.

It’s rare for democracy to produce miraculous solutions to our problems. If those of us who oppose Trump can’t defeat him with all the unintentional help he’s willing to give us, we don’t deserve to win.

Share This Post
Like it? Vote it up!
00
Previous ArticlePerfect Aim!Next ArticleTrump Is Badly Miscalculating on the Health Care Law
You May Also Like
Jay Leno Laments the One-Sided Politicization of Late Night Comedy
March 15, 2019

Trump Is Badly Miscalculating on the Health Care Law

Every American knows someone and perhaps loves someone with a chronic illness. Now Trump has ensured that the threat to people with pre-existing conditions will be front and center in yet another campaign, writes David Axelrod Source link