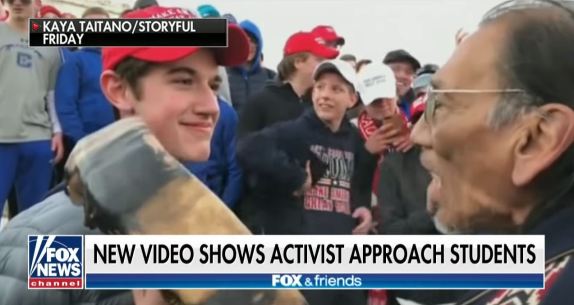 Few things illustrate the way the Left promotes lies through the allied establishment media than the recent saga of the Covington Catholic High School kids and their encounter with Leftist activist Nathan Phillips.

As Bradley Eli reported for thechurchmilitant.com, pro-life students wearing Make America Great Again (MAGA) hats were attending the March for Life in Washington, D.C. when they were approached by a Native American activist, Nathan Phillips. Phillips walked directly up to one student, Nick Sandmann, while continuing to beat his drum just inches from the young man’s face. Left-leaning media were quick to paint the pro-life and Trump-supporting students as racist and cruel to a Native American.

Mr. Phillips was described as a Vietnam veteran, however, Paul Szoldra explained in a post on taskandpurpose.com, Phillips has a long history of making “stolen valor” claims:

I was going to bring up his troublesome claims of being a “recon ranger” — which he was not. I was going to reflect on his claim that he was a “Vietnam-times veteran” who came home and was “spit on” and “called a baby killer,” despite his service record keeping him in the United States, and it being unclear where he was claiming to have come home from.

But then, another video emerged.

Many news organizations initially described Phillips as a Vietnam veteran, until they were forced to issue corrections. Well, they’re going to need to issue a few more, since Phillips apparently slipped up in 2018 and claimed that he was “a Vietnam vet” and he was “in theater” during the war — which is categorically false.

According to a Marine Corps spokeswoman, Phillips did serve in the Marine Corps from May 20, 1972 until May 5, 1976 but did not serve anywhere near Vietnam or any theater of war. He had zero deployments and his only award was a National Defense Service Medal. He briefly had the military occupational specialty of 0351 Anti-tank missile-man before being assigned as an 1161 refrigerator technician. He also was discharged as a private after four years of service following disciplinary issues, including three AWOL incidents.

Yet the Washington Post, even after other outlets corrected the record, continued to hew to the story that Phillips is a Vietnam veteran allowing others to repeat and magnify the lie through social media.

From our perspective, none of this is an accident because the media business of today is not driven by an unbiased desire to report the truth, rather it is driven by the desire to mold public opinion according to Leftist narratives.

And key to molding public opinion is establishing moral superiority.

Thus, the need to portray Nathan Phillips as a Vietnam veteran and Native American “Elder” who was being abused by white, privileged, pro-life children – none of which was true.

This false narrative was repeated over and over again, perhaps most viciously by one Jodi Jacobson in an article posted on rewire.news:

…Phillips’ testimony about an incident in which a very large group of raucous boys surrounded him and acted with extreme disrespect is being ignored in favor of an after-the-fact narrative created by white teens from a virtually all-white school with a history of blatant and public racism. The boys’ narrative also is being amplified by white journalists, further disrespecting the Native elder and discounting the accounts of eyewitnesses at the scene. This discounting of experience is familiar to many of us: the women who seek reproductive health care who are effectively told we should endure abuse, the Native elder on sacred ground being made the “aggressor” as the only adult who tries to intervene in a situation, the people of color who constantly have largely male, majority-white media telling them “there’s more to the story” of their abuse than what they say. It’s the same story, different characters that we saw played out just recently in the U.S. Supreme Court hearings of Brett Kavanaugh, who also attended an elite Catholic school and whose alleged actions many defended as an example of “boys being boys.” White boys, of course.

Got that? The National Mall is Native American “sacred ground,” exercising the First Amendment at an abortion clinic constitutes “abuse” and the Covington Catholic High School boys are proxies for the hatred the Left has for Supreme Court Justice Brett Kavanaugh.

Joy Behar, co-host of the Left-leaning “The View” explained the dynamic in this conversation with other members of the panel:

WHOOPI GOLDBERG, HOST: Many people admitted they made snap judgments before these other facts came in. But is it that we just instantly say that’s what it is based on what we see in that moment and then have to walk stuff back when it turns out we’re wrong? Why is that? Why do we keep making the same mistake?

JOY BEHAR: Because we’re desperate to get Trump out of office. That’s why.

ABBY HUNTSMAN: Not everybody though.

GOLDBERG: What does that have to do —

BEHAR: I think that’s the reason. I think the press jumps the gun a lot because we just — we have so much circumstantial evidence against this guy that we basically are hoping that Cohen has the goods and what have you and so it’s wishful thinking.

Why does the press jump the gun a lot? We think it is because Leftist social justice warriors have taken over the media and pushing Leftist narratives, not the news, is what they do. And we don’t think it is “wishful thinking,” we think it’s their new business model.

FY20 Budget or Re-election Platform? Both.

Russ Vought, acting director of the Office of Management and Budget, was ready to give his first official press conference. The soft-spoken policy wonk with the thick-rimmed glasses stepped to the podium in the White House briefing room Monday and wished the press corps “Happy Budget Day.” The occasion was the

Pelosi Is Hoist On the House's Own Petard

Speaker Nancy Pelosi certainly chose the right moment to declare that she's against impeaching President Trump. The special prosecutor, Robert Mueller, is, if one believes the papers, only days away from handing in to the attorney general a report oRead Full Article » Source link