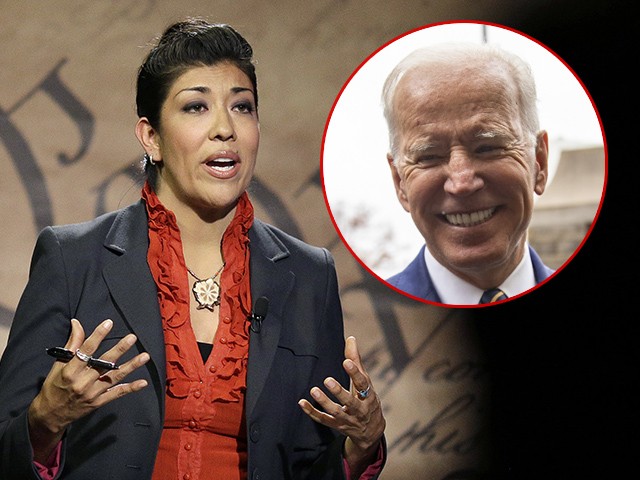 Lucy Flores, the former Nevada Democrat lawmaker who first accused former Vice President Joe Biden of inappropriate touching, criticized the potential 2020 Democrat candidate for making light of the allegations against him on Friday.

“It’s clear @JoeBiden hasn’t reflected at all on how his inappropriate and unsolicited touching made women feel uncomfortable. To make light of something as serious as consent degrades the conversation women everywhere are courageously trying to have,” Flores wrote on social media.

It’s clear @JoeBiden hasn’t reflected at all on how his inappropriate and unsolicited touching made women feel uncomfortable. To make light of something as serious as consent degrades the conversation women everywhere are courageously trying to have.

In a revealing essay for The Cut, Flores wrote Biden made her feel “uneasy, gross, and confused” after kissing the back of her head and smelling her hair at a November 2014 event when she was the Democrat nominee for lieutenant governor of Nevada.

Earlier Friday, Biden spoke before the International Brotherhood of Electrical Workers in Washington, D.C., his first public appearance since seven women came forward with #MeToo allegations against the 76-year-old.

“I just wanted to let you know I had permission to hug Lonnie,” the vice president quipped after taking the stage and hugging IBEW union head Lonnie Stephenson.

Roughly halfway through his remarks, Biden invited children on stage and shook each of their hands.

Former VP Biden invites children on stage during his speech at a construction conference, puts his arm around a boy, and makes light of recent news related to his physical interactions with people: “By the way, he gave me permission to touch him.” pic.twitter.com/XN9YmaaS1b

“Hey all those kids, you want to come up on the stage, you can come up, it’s okay, come on up, come one,” Biden said. “Any kids can come up.”

“By the way, he gave me permission to touch him, okay?” he then joked, sparking laughter from the audience. “Everyone knows I like kids better than people,” he said.

Appearing last Sunday on CNN’s The Lead, Flores said Biden treatment of woman was “disqualifying” as a presidential candidate. To date, seven women have accused Biden of making them feel uncomfortable. Another one of those women, Sexual assault survivor Caitlyn Caruso told the New York Times that former President Barack Obama’s number two rested his hand on her thigh during an event on sexual assault at the University of Nevada and hugged her “just a little bit too long.”

Following his address, Biden told reporters he would not apologize for his past actions and said he wouldn’t be surprised if more allegations emerged in the coming days.

“The fact of the matter is, I made it clear if I made anyone feel uncomfortable, I feel badly about that. That was never my intention ever, ever, ever,” the former vice president said. “I’m sorry I didn’t understand. I’m not sorry for any of my intentions. I’m not sorry for anything I have ever done. I’ve never been disrespectful intentionally to man or woman. That’s not the reputation I’ve had since I was in high school.”

Biden’s remarks come days after he pledged in a two-minute video shares to social media that he will “more mindful about respecting personal space.”

“Social norms are changing,” Biden tweeted. “I understand that, and I’ve heard what these women are saying.”

“Politics to me has always been about making connections, but I will be more mindful about respecting personal space in the future,” he continued. “That’s my responsibility and I will meet it.”

Share This Post
Like it? Vote it up!
00
Previous Article‘Sad Day’ When Democrats Vote ‘Against Israel and in Support of the BDS Movement’Next ArticleUnplanned Movie Opens to Highly Successful Opening Weekend Despite Being Targeted by Hollywood and Twitter
You May Also Like
Six Cartel Gunmen Killed in Mexican Border State Shootout
August 18, 2019
MoveOn Launches Nationwide 'Impeach Donald Trump' Rallies Saturday
June 15, 2019
‘Howdy, Modi!’: Behind the Trump-Modi Bromance
September 24, 2019

The Mass Misery Created by Illegal Immigration
May 10, 2019

It’s survived the full force of Hollywood and social media assault and thrived. The saga of Unplanned reads like an espionage tale in modern Hollywood. The film from Pureflix, the same producers as God’s NOT Dead, I Can Only Imagine and The Case for Christ, was famously shot entirely in secret