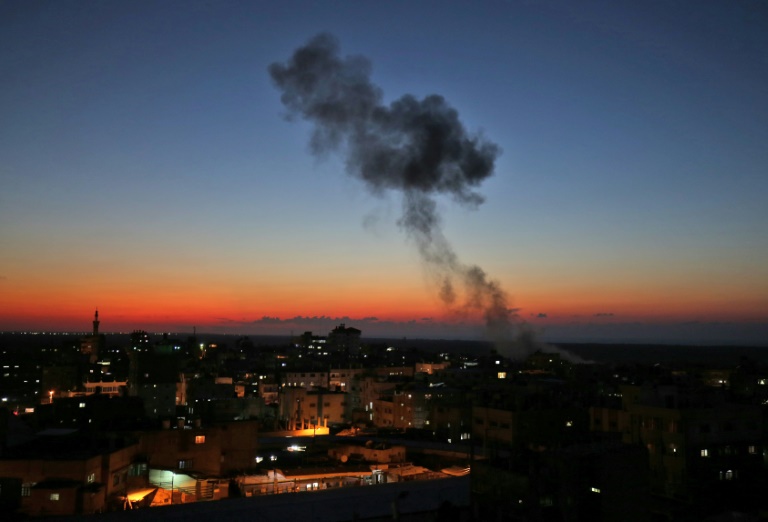 TEL AVIV — In the early morning hours here, the Israel Defense Forces said it began striking “terror sites in Gaza” after two rockets were launched from the coastal enclave in the direction of central Israel.

We have just started striking terror sites in Gaza. Details to follow.

The IDF retaliation was immediately followed by more reports of Israeli rocket sirens going off, this time in the Israeli communities close to the Gaza Strip.  The IDF said it was investigating the cause of the latest incoming rocket alerts.

It was not immediately clear which terror faction was responsible for the rocket fire toward Tel Aviv.

The usual suspects — Hamas, the Popular Resistance Committees and the Iran-backed Palestinian Islamic Jihad — each denied their respective terror groups were behind the projectile attacks.  The Iran-backed Al-Sabareen terrorist group in Gaza has yet to release an official statement following the rocket attacks.

The Hamas-controlled Gaza Interior Ministry labeled Thursday’s rocket attacks targeting Tel Aviv “outside of the national consensus,” with Hamas claiming it would clamp down on those responsible.

The rocket attacks came as Hamas and Egypt were discussing a long-term truce with Israel for the Gaza Strip.

Hamas’s so-called military wing, the Izz ad-Din al-Qassam Brigades, not only denied it was behind the rocket launchings but said the attacks on Israel came while Hamas members were meeting with Egyptian officials over the Gaza truce.

“The Izz ad-Din al-Qassam Brigades affirms that it’s not responsible for the rockets fired towards the enemy earlier tonight, especially considering they were shot off during a meeting between the Hamas leadership and the Egyptian security delegation about understandings pertaining to the Gaza Strip,” the Brigades said.

The IDF confirmed that two rockets were fired from the Gaza Strip toward Israel on Thuraday, triggering rocket sirens throughout central Israel.

Initial reports claimed that Israel’s Iron Dome system intercepted one of the rockets fired toward Tel Aviv but the IDF later said in a statement that no interceptions were made. The IDF usually does not fire Iron Dome batteries if a rocket is calculated by army systems to land in the sea.

“Two rockets were launched from the Gaza Strip towards Israeli territory. The alert and warning systems operated as required,” the IDF said. “No interceptions were made by aerial defense systems. No damage or injuries were reported. There are no special instructions for the civilian home front.”

According to reports, a number of Israelis were treated for shock.

Residents reported hearing a loud explosion during the rocket attacks on Tel Aviv. This reporter, based on the northern Tel Aviv coastline, heard one large blast following the rocket siren.

Share This Post
Like it? Vote it up!
00
Previous ArticleCalifornia Gov. Gavin Newsom Suspends Death Penalty, Calls System ‘a Failure’Next ArticleTrump to Issue First Veto as Senate Rejects Emergency Declaration
You May Also Like

How to Get Back on Track on Improving Schools
May 7, 2019
NYT Head Outlines Plans to Shift Trump Coverage from Russia to Race
August 17, 2019
‘Trump Rapes Us All with Impunity’
July 25, 2019

Within minutes, Trump tweeted, “VETO!” 12 Republicans joined Democrats in rejecting Trump’s declaration of national emergency at the southern border. More from the WaPo: The Senate passed a resolution Thursday to overturn President Trump’s declaration of a national emergency at the U.S.-Mexico border, with 12 Republicans joining all the Democrats to deliver a

The order gives a reprieve for the 737 people on death row, including several real monsters. California Governor Gavin Newsom took his pen in hand this week, and signed an order putting an executive moratorium on the death penalty in the state. The action suspends any further executions in California as long