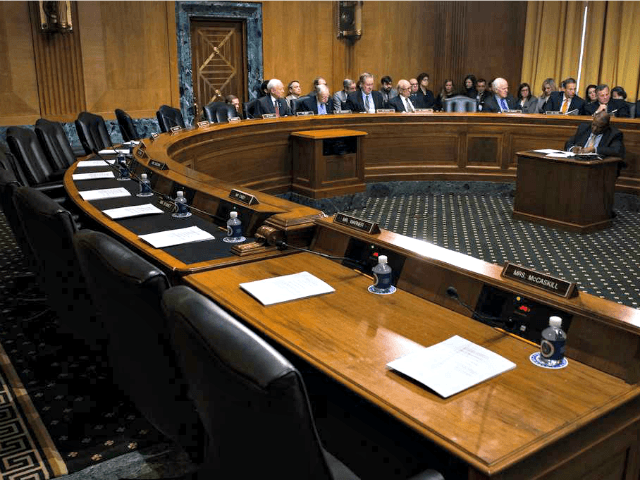 WASHINGTON, DC – Senate Republicans are preparing to reinterpret Senate Rules in coming weeks to reduce the number of hours required to confirm presidential nominations, responding to Democrats’ unprecedented obstruction of President Trump’s nominees for both the judiciary and the Executive Branch.

Under Senate Rule XXII, debate on any matter can continue indefinitely. This is called a filibuster, when senators are deliberately continuing debate for the purpose of preventing a vote – unless three-fifths of senators (60) vote to break the filibuster by invoking cloture. Once cloture is invoked, further debate is limited to 30 additional hours, then a final vote must take place.

Rule XXII is designed to force debate on legislation. Historically it has generally not been used on presidential nominations. You can amend legislation, but a nomination is a simple yes-or-no proposition.

Article II of the Constitution specifies that all federal judges require Senate confirmation, as do senior positions in the administration. Currently, 1,200 positions out of 4,100 political appointments in a presidential administration are “principal officers” that are nominated by the president and confirmed by the Senate.

Theoretically, the Senate could use its confirmation power to keep seats on the federal judiciary – including even the Supreme Court – open indefinitely. Senators could also employ it to hamstring a presidential administration by denying a vote to presidential nominees for key positions in the government.

In fact, that is what Senate Democrats are doing now. Judges are being slow-walked, with more cloture votes being required in two years for President Trump’s picks than all the judicial nominations of every previous president combined since the filibuster was created in the late 1800s. Similarly, hundreds of the 1,200 Senate-confirmed positions in the Trump administration are still vacant.

After two years of debating what to do about this unprecedented obstruction, Senate Republicans now appear to have the votes to reinterpret Senate rules to rein in this practice. It takes a two-thirds supermajority vote in the Senate (67) to change the chamber’s rules, but it only takes a simple majority (51) to reinterpret existing rules.

Under a reinterpretation proposed by Sen. James Lankford (R-OK), nominees for the Supreme Court, federal courts of appeals, the Cabinet, and certain commissions can still receive 30 hours of post-cloture debate. However, nominations for federal trial courts – called district courts – and all other administration posts will be limited to two hours.

A number of Republicans who are either moderates or who place special value on Senate traditions have been unwilling to take this step. But the mood has changed as those senators have witnessed the problem continuing to worsen, as Democrats have spurned entreaties by these Republicans’ to meet them partway.

Various GOP senators are giving different timeframes for when the vote on reinterpreting the 30-hour rule will occur, with some saying “this month” and others referring to “weeks.” The vote does not appear imminent in light of certain vote priorities the Senate majority already have planned, but it looks increasingly likely that it will happen sometime in April.

Share This Post
Like it? Vote it up!
00
Previous ArticleYes, Justin, that’s how the rest of Canada feels about you right now.Next ArticlePopulists and Traditionalists Are Battling in Both Parties
You May Also Like

Democrats Kiss the Ring Of Al Sharpton
April 9, 2019
O'Rourke: 'We Need to Look at' Mandatory Licensing of Gun Owners and 'Move Forward' 'If it Makes Sense' to the Public
May 22, 2019
Border Patrol Facilities in West Texas Again Face Overcrowding
July 21, 2021
Dems Keep Taking Black Voters for Granted – At Their Peril
May 12, 2019

Populists and Traditionalists Are Battling in Both Parties

WASHINGTON -- Dick Cheney, the former vice president, made just about the nastiest crack a Republican could offer about President Trump's foreign policy when he said it "looks a lot more like Barack Obama than Ronald Reagan." Obviously, the comparison is flawed. But say this much for Cheney: He's the rare

Yes, Justin, that’s how the rest of Canada feels about you right now.