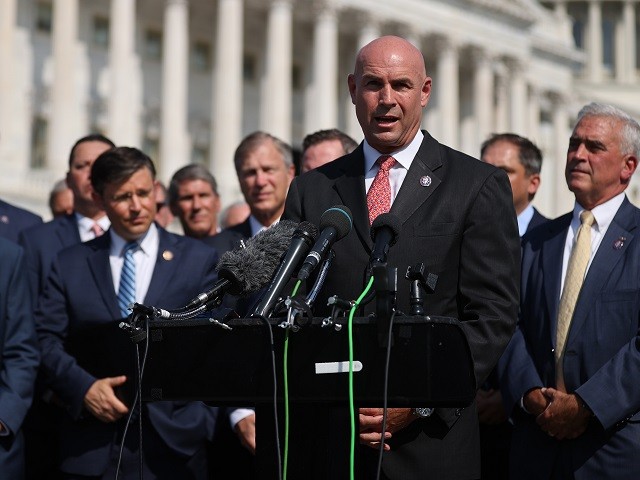 Sunday on Fox News Channel’s “America Reports,” Rep. Jake Ellzey (R-TX) called on Congress to be called back into session to have the Afghanistan evacuation August 31 deadline extended and to take back the Bagram Air Base.

Ellzey, who completed tours in Iraq and Afghanistan as a Navy fighter pilot, emphasized that the United States needs to show its strength by not negotiating with the Taliban.

“I flew out of Bagram as a contractor in 2013 and 2014, and I’d like to know who made the decision to use only the Kabul airport instead of Bagram because that doesn’t make any sense to anybody,” Ellzey outlined. “And when you are relying on the safe passage of the Taliban to get people out, that doesn’t make any sense either. The Taliban are a terrorist organization. We have often said we don’t negotiate with terrorists, and then we gave them a list of American names. We are going to find out who that is, too.”

He continued, “Leader McCarthy called for Speaker Pelosi to call us back into session. Every other government that has been involved in this operation has called their governments back into session. The Capitol building standing behind me is empty at this time, but it shouldn’t be. We need to be called back into session, compel this president to do what is right because missions don’t end when he says they do. Missions end when they are over, and they’re successful and when we get all Americans out.”

Host Sandra Smith asked, “What do you want to see happen next, congressman?”

“I want to see us come back into session, we compel the president to extend that deadline, I want us to take back Bagram, and I want us to ensure our allies there, our brave men and women on the ground there, that this is not for nothing,” Ellzey replied. “I want to encourage our veterans who fought there that they did not fight in vain and to show everyone in the world once again that America deals from a position of strength instead of weakness. And everything the Biden administration has done has been the exact opposite of that.”

We’re in a Permanent Coup
October 14, 2019
Mueller Submits Report, Signaling Probe Has Ended
March 23, 2019
Dems Wrong to Hound Trump with Continuing Investigations
May 24, 2019
Tariff Tactic Is the Right Response to China's Cheating
May 10, 2019

Joe Biden promised the US withdrawal would be "secure and orderly." Critics say it's been marred by chaos and missteps like the Kabul airport bombing. Source link Veterans In Defense Of Liberty - Vidol