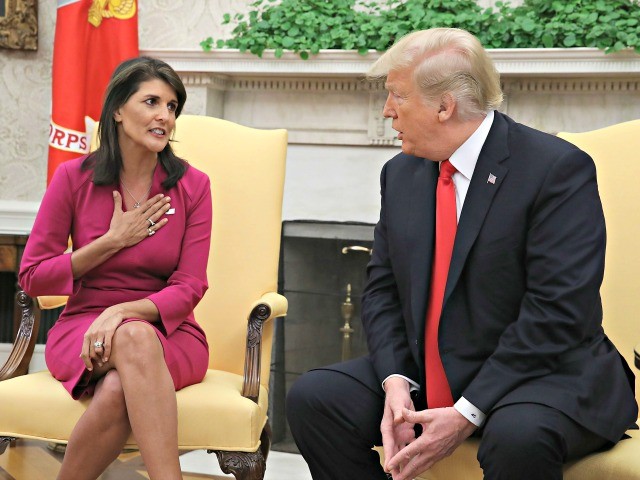 Speaking to Fox News reporter Adam Shaw, Haley applauded the president for the eradication of the Islamic State of Iraq and the Levant (ISIS) and his handling of complex national security threats around the globe.

If you look around the world, President Trump has a record every American should be proud of. In the Middle East, the ISIS caliphate has been destroyed, and we’ve stopped handing billions in cash to Iran that it used to fund terrorism. The North Korean regime is no longer testing long-range missiles. America is once again treating the Cuban dictatorship like the pariah it is, and Maduro’s days are numbered in Venezuela

“America is strong again, and it’s because of President Trump’s decisions,” she added.

The former Trump administration official issued her glowing praise of President Trump ahead of a New York City fundraiser this weekend in support of the president’s 2020 re-election campaign.

“I’m happy to partner with the RNC supporting President Trump’s reelection, and I look forward to doing more for his campaign in the next year,” she told the news outlet.

Haley’s support for a second Trump term is nothing new. Upon announcing her resignation from post last October, she immediately squashed speculation that she would challenge her former boss for the White House.

Despite her support for President Trump, Haley hasn’t taken his side in battles with Democrats. In August, the former U.S. diplomat responded directly to the president’s early tweet regarding Rep. Elijah Cummings’ (D-MD) home burglary, tweeting that his comment was “so unnecessary.”

“Really bad news! The Baltimore house of Elijah Cummings was robbed. Too bad!” tweeted the president at the time.

This is so unnecessary. 🙄

This was far from the first time Haley had taken a shot at the president.

She was critical of then-candidate Trump during the 2016 presidential election, previously declaring that he represented “everything a governor doesn’t want in a president.”

In 2016, Haley endorsed Sen. Marco Rubio (R-FL) in his failed bid for the White House.

Despite her repeated attacks, President Trump nominated Haley for U.S. Ambassador to the U.N., a role she fulfilled between January 2017 and December 2018. Since leaving the administration, she has joined Boeing’s board of directors and formed the “Stand for America” policy group.

Share This Post
Like it? Vote it up!
00
Previous ArticleChuck Todd: A National Emergency Is Upon Us, Democracy Under Attack From Trump | VideoNext Articlelie-a-watha
You May Also Like
‘Climate Emergency’: Ireland Set to Ban Private Cars While Planning Mass Third World Migration
June 20, 2019
Limo employee faces 40 counts after crash killed 20 people
April 7, 2019
Six Months of Overwrought Whining About January 6
July 14, 2021
Drivers threatened with $250 fine for sleeping in car
April 6, 2019

Here’s How the Democratic Nomination Battle Will Go
March 6, 2019

Chuck Todd: A National Emergency Is Upon Us, Democracy Under Attack From Trump | Video

NBC's Chuck Todd declared that a "national nightmare is upon us" in reaction to President Trump calling on China as well as Ukraine to investigate Joe Biden as he departed the White House Thursday afternoon.CHUCK TODD, NBC NEWS: I don't say this lightly, but let's be frank, a national nightmare