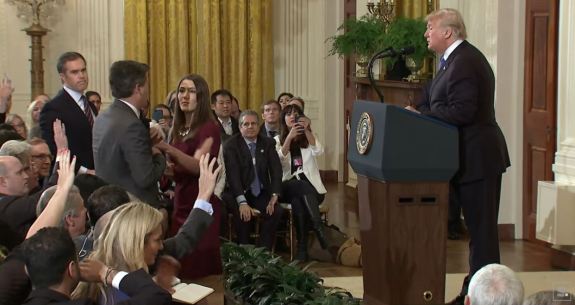 One of the more interesting diversions from the real criminality exposed by the conclusion of the Mueller investigation is the discussion, either with sadness or glee, about the alleged loss of credibility suffered by the establishment media now that the Trump – Russia collusion narrative has been shown to be a hoax.

As we see it, the media’s loss of credibility has closely tracked its slide into the mire of liberal politics.

Investor’s Business Daily reported a long-term study of reporters’ leanings and attitudes, “The American Journalist in the Digital Age,” shows that the drift toward liberalism has been going on for years within journalism.

By 2014, the year of the last survey, the share of journalists identifying as Republican had shrunk to 7.1%, an 18.6 point drop. From having near-parity with the journalist Republicans in the 1970s, Democrats today outnumber Republicans today by four to one.

Meanwhile, the share of journalists calling themselves “independent” has surged to 50.2%. In case you think the growing body of Independents qualifies as “the center,” think again.

Repeated surveys show that independents are usually left-of-center on social issues, but centrist on fiscal issues and many issues of governance. So, you should really characterize them as “moderate left,” wrote the Editors of IBD.

Now, Google “media loss of…” you get “credibility” before you even get to the fourth word in the search, not “viewers,” not “market share,” but the media’s loss of credibility is the first topic internet users are apparently interested in investigating.

And a quick browse back through archived articles on the subject will demonstrate that this is a worldwide issue that predates the election of Donald Trump, although there is no doubt his coining the phrase, “fake news” certainly helped establish the issue in the public mind.

Back in April of 2016, before Trump had wrapped-up the Republican nomination for President, Carole Feldman, writing for the Associated Press published an interesting article on media credibility.

According to Ms. Feldman’s reporting, trust in the news media is being eroded by perceptions of inaccuracy and bias, fueled in part by Americans’ skepticism about what they read on social media.

Just 6 percent of people say they have a lot of confidence in the media, putting the news industry about equal to Congress and well below the public’s view of other institutions.

Feldman reported that in that presidential campaign year, Democrats were more likely to trust the news media than Republicans or independents.

The poll, wrote Feldman, shows that accuracy clearly is the most important component of trust.

Nearly 90 percent of Americans said it’s extremely or very important that the media get their facts correct, according to the study. About 4 in 10 say they can remember a specific incident that eroded their confidence in the media, most often one that dealt with accuracy or a perception that it was one-sided. (emphasis ours)

About 6 in 10 Americans watch, read, or hear news several times a day, as computers, smartphones and tablets make it easier for people to follow the news on an on-demand basis reported Ms. Feldman.

A majority of people get news from social media, most frequently by far from Facebook. “Facebook is the place where everyone is, and so you’re not necessarily looking for news, but you’re getting it,” said Tom Rosenstiel, executive director of the American Press Institute.

Yet only 12 percent of those who use Facebook say they have a lot of trust in the news and information they see on the site reported Ms. Feldman.

Twitter attracts smaller numbers for news than Facebook, and about 18 percent have a good deal of trust in what they read there wrote Feldman, and there was also viewer skepticism of other social media sites.

A few months later, in September of 2016, the Gallup Organization published its own study of media perception, and it found an even more precipitous decline.

Gallup’s Art Swift reported the survey found Americans’ trust and confidence in the mass media “to report the news fully, accurately and fairly” had dropped to its lowest level in Gallup polling history, with 32 percent saying they have a great deal or fair amount of trust in the media. This was down eight percentage points from the previous year.

Just 14 percent of Republicans expressed trust in the media, down from 32 percent the previous year reported Swift.

Gallup began surveying trust in the media in 1972, (just after the survey of journalist political affiliation began) and has done so on a yearly basis since 1997. Over the history of the entire trend, Americans’ trust and confidence hit its highest point in 1976, at 72%, in the wake of widely lauded examples of investigative journalism regarding Vietnam and the Watergate scandal. After staying in the low to mid-50s through the late 1990s and into the early years of the new century, Americans’ trust in the media has fallen slowly and steadily. It has consistently been below a majority level since 2007.

Now, here’s the interesting thing about the Gallup survey; it shows that over time Democrats have consistently had substantially higher confidence in the media, except in 2000, where both were around 50 percent.

Gallup’s conclusion was while it is clear Americans’ trust in the media has been eroding over time, the 2016 election campaign may be the reason that it fell so sharply. With many Republican leaders and conservative pundits saying Hillary Clinton received overly positive media attention, while Donald Trump received unfair or negative attention, Gallup concluded that may be the prime reason Republican voters’ relatively low trust in the media evaporated even more.

It is also possible, observed Gallup’s Art Swift apparently without irony, that Republicans think less of the media as a result of Trump’s sharp criticisms of the press.

At about the same time Gallup was in the field with their survey, Rasmussen Reports conducted a similar survey and found that 88 percent of voters who support Trump in the presidential race believe news organizations skew the facts, while most Clinton backers (59 percent) trust media fact-checking. Among the supporters of Libertarian Gary Johnson and Green Party candidate Jill Stein, sizable majorities also didn’t trust media fact-checking.

Here’s our take, Trump finally let the genie out of the bottle and confirmed what Republican voters, and others, such as Libertarians and Greens who do not accept the establishment Democrat liberal consensus of the establishment media have felt all along. Trump gave everyone permission to acknowledge whose side the media is really on, and those outside the establishment are no longer bashful about saying they do not trust the media to provide accurate facts free from bias in favor of the liberal establishment.

Share This Post
Like it? Vote it up!
00
Previous ArticleThe airlines have bought into the fantasy of multiple genders….Next ArticleThis is the future…
You May Also Like
Lamar Alexander calls for “New Manhattan Project for Clean Energy” to Counter Green New Deal
April 7, 2019
Yang Versus Beto: A Tale of Two Charismas
April 6, 2019
Seeing the Truth About Abortion Will Change People's Minds
April 2, 2019
Facebook and Twitter Refuse to Act Against Far-Left Troll Vic Berger, Who Smeared Family of Mike Cernovich
May 9, 2019
Israeli Killed After Terror Rocket Strikes His Home
May 5, 2019
2020 Candidate’s ‘Rags to Riches’ Story Is Fake
June 2, 2019

This is the future...

The airlines have bought into the fantasy of multiple genders....

[ad_1] The airlines have bought into the fantasy of multiple genders.... [ad_2] View Reddit by estump - View Source