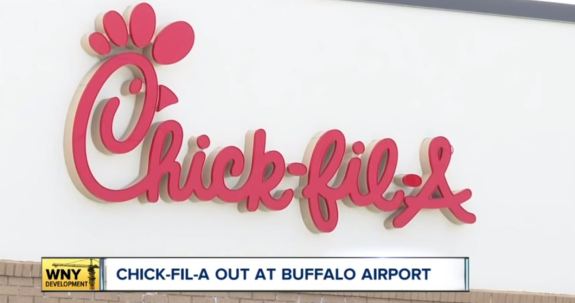 The recent sagas of the political discrimination against Chick-fil-A and the NRA are just two of the many cases of politically-driven regulatory action by Democrat officeholders and elected officials. What’s been done to Chick-fil-A and the NRA demonstrate just how bad life in America could get if Democrats ever return to complete control of the federal government.

In San Antonio, TX and Buffalo, NY Chick-fil-A was prohibited from expanding into those cities’ airports by Democratic lawmakers who claimed, without evidence, that Chick-fil-A discriminated against homosexuals and transgendered individuals.

The trampling of the First Amendment rights of the openly Christian business was so outrageous that the New York affiliate of the American Civil Liberties Union issued a statement after the chicken sandwich chain was blocked from the Buffalo Niagara International Airport.

“The First Amendment does not permit the NFTA to base its contracting decisions on the political views of a vendor.”

Texans are fortunate to have conservative Republican elected officials like Attorney General Paxton to defend them against Democrats bent on using the authority of their office to harass or bankrupt those whose political views differ from theirs, but New Yorkers are not so fortunate.

The NRA has been forced to file a lawsuit that alleges that New York Governor Andrew Cuomo and top members of his administration abused their regulatory authority over financial institutions to threaten New York banks and insurers that associate with the NRA or other “gun promotion” groups, and that those threats have jeopardized the NRA’s access to basic insurance and banking services in New York.

As the ACLU pointed out in its friend of the court brief in the NRA lawsuit against Cuomo, political advocacy organizations like the NRA (or the ACLU or Planned Parenthood) need basic business services, like insurance and banking, to operate. The NRA says that the state, using its regulatory powers over those industries, is threatening financial companies that do business with the NRA.

As David Cole, ACLU Legal Director noted in an August 2018 column, the NRA points to both public and non-public actions taken by the Cuomo administration to penalize it for its views. State officials issued press releases and sent threatening letters to banks and insurance companies, and also allegedly communicated “backchannel threats” to companies with ties to the NRA, warning that they would face regulatory action if they failed to end their relationships with the organization.

And let’s be clear about what has been going on in New York; the state has admitted, in its own words, that it focused on the NRA and other groups not because of any illegal conduct, but because they engage in “gun promotion” — in other words, because they advocate a lawful activity.

If this sounds vaguely familiar it should, because it is very similar to what the Obama administration did in its so-called Operation Choke Point.

As John Berlau, senior fellow at the Competitive Enterprise Institute, wrote in a 2018 column for Forbes, documents obtained through discovery and introduced in a lawsuit stemming from the Obama administration’s “Operation Choke Point,” show that powerful bank regulatory agencies engaged in an effort of intimidation and threats to put legal industries they dislike out of business by denying them access to the banking system.

Mr. Berlau found that in 2011, an FDIC guidance document featured a chart of business categories engaged in what it called “high-risk activity.” These included “dating services,” “escort services,” “drug paraphernalia,” “Ponzi schemes,” “racist materials,” “coin dealers,” “firearm sales,” and “payday loans.” The FDIC would post this and similar lists in other guidance documents and on its web site.

A staff report of the House Government Reform and Oversight Committee, reviewed for Berlau’s column, puzzled over many of these categories. “FDIC provided no explanation or warrant for the designation of particular merchants as ‘high-risk,’” the report observed. “Furthermore, there is no explanation for the implicit equation of legitimate activities such as coin dealers and firearm sales with such patently illegal or offensive activities as Ponzi schemes, racist materials, and drug paraphernalia.”

In 2014, the Washington Times reported that a number of gun shops had their bank accounts abruptly frozen or terminated. One shop owner received a note from his bank stating that “while this letter in no way reflects any derogatory reasons for such action on your behalf,” his “line of business is not commensurate with the industries we work with.”

The list of “high risk” businesses was nothing but pure liberal politics, because, as George Mason University law professor Todd Zywicki noted in the Washington Post, “Notably absent from the [Obama] FDIC’s hit list, for example, are abortion clinics [and] radical environmental groups.”

It took the election of Donald Trump and a diligent investigation by House Financial Services Subcommittee on Financial Institutions and Consumer Credit, chaired by Republican Rep. Blain Luetkemeyer (MO-3), to bring Operation Choke Point to an end. However, as what’s going on with Chick-fil-A and the NRA prove, there remains no protection except the ballot box to curtail the ability of Democrats to shut down arbitrarily whole classes of businesses they deem to be “politically incorrect.”

Share This Post
Like it? Vote it up!
00
Previous ArticleEveryone Whose Head Is Screwed On Right Should Fight This Kind Of ThingNext ArticleWhat Is Attorney General Barr Trying to Hide?
You May Also Like
Attorney General Barr Blocks Catch and Release by Migration Judges
April 17, 2019
Exclusive — Burgess Owens on Reparations: ‘Every Bad Thing That’s Happened to My Race Over the Years’ Goes ‘Right Back to the Democratic Party’
June 20, 2019
Pete Buttigieg Serious about Carbon Tax to Fight Climate Change
April 20, 2019
Job Creators Network Billboards Roast Alexandria Ocasio-Cortez After Her Green New Deal Got Zero Senate Votes
March 27, 2019
Estimate of Migrants Involved In EU Border Breach Rises to 6,000
May 18, 2021

What Is Attorney General Barr Trying to Hide?

AP Photo/Sait Serkan GurbuzThe Mueller report is coming. Attorney General William Barr notified Congress that he was "well along" in making redactions to the report, and expected to release the report by "mid-April, if not sooner."Read Full Article » Source link Veterans In Defense Of Liberty - Vidol

Conservative social media aficionados are probably aware of the saga of “Victor” a MAGA hat wearing retiree who was accosted in a Palo Alto, California Starbucks by one Rebecca Parker Mankey, aged 46, who tried to incite a mob against him and run him out of the coffee shop. Mankey started