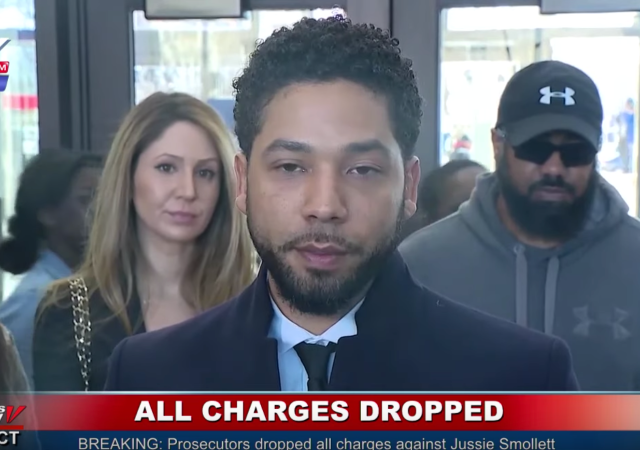 Department is fuming over the State’s Attorney’s Office for dropping the charges.

The Chicago Police Department (CPD) is not holding back its anger over the State’s Attorney dropping all charges and sealing the case of the alleged race crime hoax that involved Empire actor Jussie Smollett.

CPD released all of its investigation files on Smollett’s case.

CPD told Fox News the department “is not happy” and reminded everyone how it “exhausted manpower and numerous hours investigating this case to make sure it was handled properly.”

From The Chicago Tribune:

The 61-page police file — which was redacted to remove witness names and other personal information — lays out in detail the investigative steps taken by a team of detectives to unravel what happened to Smollett on the frigid January night in Streeterville when he claimed he was the victim of a racist and homophobic attack.

While the detective files cover much of what was already publicly known about the investigation, they shed light on the moves police and prosecutors made behind the scenes to interview witnesses in front of a grand jury amid the media frenzy over the case.

Shortly before Smollett was charged in February, detectives arranged to have two brothers who had allegedly been hired to attack the actor appear before the grand jury at the Leighton Criminal Court Building at 26th Street and California Avenue.

The State’s Attorney’s Office dropped all charges against Smollett without informing the police department nor did it consult with Smollett’s attorneys.

CPD pointed to politics as the reason:

“The police department worked super hard on this. They put a ton of manpower on it because they knew it sounded wrong from the beginning,” another former Chicago-based law enforcement source said.

“What’s interesting is that the former chief-of-staff of Michelle Obama called the state’s attorney about the case, saying the (Smollett) family was concerned. Shortly after, the state’s attorney recused herself and now the charges are dropped and the court has sealed the record.”

It’s Chicago. OF COURSE political corruption is involved. No, I’m not just saying that:

Another retired police chief in the region told Fox News that politics has long plagued the Chicago judicial system.

“Politicians run for office promising to change the way things are done and this is what they do,” he said. “Policemen work their butts off to do a good job and this is what they get. The least a prosecutor could have done was to send it to the grand jury. It’s no wonder policemen get discouraged.”

Reports came out recently “that Cook County State’s Attorney Kim Foxx had been in contact with Mrs. Obama’s former chief-of-staff, Tina Tchen, who emailed her expressing the ‘concerns’ that the Smollett family had about the ongoing investigation.” Foxx then supposedly spoke with a Smollett relative after Tchen gave her the number.

Kevin Graham, president of the Chicago Fraternal Order of Police, expressed outrage and disgust over the decision to drop charges while hinting “that Foxx may have interfered with the police probe and sought an investigation into whether Foxx herself had violated any laws.”

He wants federal authorities to get involved:

“We are interested in having the federal authorities look into what occurred here because we’re baffled by what has happened,” Kevin Graham told “America’s Newsroom.”

“We also think that it’s a little strange that she never that no one ever told the police department, the F.O.P, the mayor’s office that they were going to dismiss the charges in this case.”

Share This Post
Like it? Vote it up!
00
Previous ArticleJob Creators Network Billboards Roast Alexandria Ocasio-Cortez After Her Green New Deal Got Zero Senate VotesNext ArticleStacey Abrams Says ‘Race Plays a Part’ in Hype for Beto Over Herself and Andrew Gillum
You May Also Like
The U.S. Should Treat Immigration Like a Job Interview
August 14, 2019
Joe Biden Is Obama Without Hope
April 24, 2019