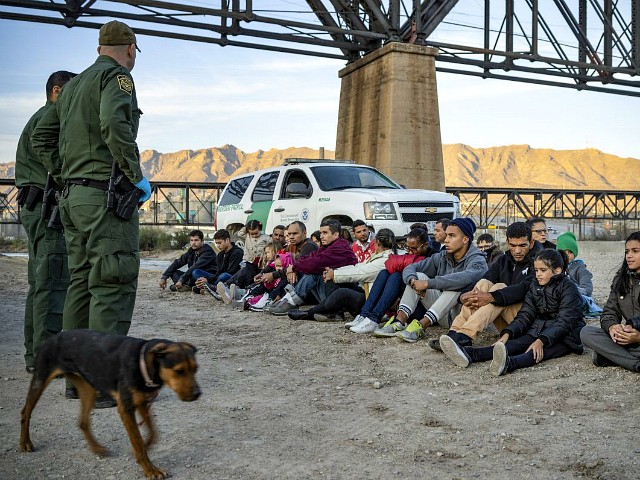 The fast-growing migrant rush over the U.S. border is collapsing border security and overwhelming the ability of border agents to process and protect migrants, DHS Secretary Kirstjen Nielsen said in a Thursday letter to all members of Congress.

“We face a system-wide meltdown … We are witnessing the real-time dissolution of the immigration system,” the head of the Department of Homeland Security wrote March 28 in a six-page letter. She added that she will soon ask for an emergency funding bill:

I will be working with the Office of Management and Budget to provide you additional details in the near future, but the situation is so dire we want to make notification to you now that we will require additional resources … to ensure immediate safety and care of individuals in our custody.

Her letter emphasized her concern for the aid and welfare of the migrants, and she minimized any mention of Americans’ concerns about the personal and financial costs imposed by the cartels’ trafficking of drugs into U.S. communities and of cheap labor into U.S. workplaces. She also did not mention the opposition by Congress and the business sector to legal reforms that would curb cheap-labor migration, such as the E-Verify system, which exposes employers who try to hire illegals. She wrote:

My greatest concern is for the children [brought by the migrants], who are put at high risk by this emergency and who are arriving sicker than ever before after travelling on the treacherous trek … a resource surge is needed throughout the system to ensure efficient throughput and proper care [of migrants] … including conducting [health and] welfare checks, preparing meals, and accounting for personal property.

Nielsen’s statement did include vague references to the harm caused by the migration to Americans:

We are grappling with a humanitarian and security catastrophe … The result is a dangerous and growing backlog of individuals in custody that has forced us to begin releasing large numbers of aliens … Without additional assistance, we will be forced to increase the releases of the single-adult population from ICE — the only population for which we can currently effectively enforce U.S. immigration laws.

But her letter includes far more appeals to help provide for the welfare and safety of the migrants who have triggered the crisis, including the statement that “our most urgent need is to increase [migrant] throughput to avoid threats to life and property.”

Once the migrants get through the border, they are free to take jobs at wages that are below the level sought by blue-collar Americans. But the migrants’ willingness to work service jobs for cheap is a financial and status boon for employers and upper-income Americans.

NEW – DHS Sec Kirstjen Nielsen is asking for immediate action from Congress to address a “dire situation” at the border including a request for new authority to send unaccompanied minors back to their home countries. “Now we face a system-wide meltdown,” she wrote in a letter. pic.twitter.com/NMocGkaXVS

On Monday, border commissioner Kevin McAleenan provided reporters with some details about the Central Americans’ rush into Americans’ society, jobs, and schools. The March inflow alone will include roughly 15,000 parents and 40,000 children in “family units” who will ask for asylum — and then will be released — plus roughly 35,000 single adults who will try to evade border officers, he said.

McAleenan pinned the blame on Congress and the judges who have jointly cut legal holes in the border fences by allowing migrants to stream into U.S. cities, jobs, and schools if they merely ask for asylum:

The increase in family units is a direct response to the vulnerabilities in our legal frameworks where migrants and smugglers know that they will be released and be allowed to stay in the U.S. indefinitely pending immigration proceedings that could be many years out. This is due to court orders that undermine the integrity of our immigration system. There is no questioning [about] why this is happening.

Current trends suggest that almost one million migrants — including perhaps 400,000 workers — will rationally grab Congress’s tacit invitation to migrate into the United States during 2019.

That migrant inflow augments the normal inflow of roughly 400,000 illegal migrants who sneak across the border, the overstay of several hundred thousand legal visitors and tourists, the arrival of roughly one million legal immigrants, and the arrival of at least one million new white-collar and blue-collar temporary visa-workers. All told, the federal government is expected to allow roughly three million additional legal or illegal foreign workers to flood the U.S. labor market in 2019, just as four million American youths begin looking for the well-paid careers they need to get married, buy houses, and raise families.

On Thursday, Trump displayed anger at Mexico and the Central American governments for not stopping their poor citizens from migrating into Americans’ rich and peaceful society.

Mexico is doing NOTHING to help stop the flow of illegal immigrants to our Country. They are all talk and no action. Likewise, Honduras, Guatemala and El Salvador have taken our money for years, and do Nothing. The Dems don’t care, such BAD laws. May close the Southern Border!

Trump also blamed the Democrats for repeatedly blocking his immigration reforms — yet GOP leaders and many GOP senators also did not try to push those reforms when they held the majority in the House and Senate.

The Trump reforms are strongly opposed by business donors who gain when the government imports more legal and illegal labor, more consumers, and more renters, even though most of the legal and illegal migrants will eventually support Democratic candidates.

We have a National Emergency at our Southern Border. The Dems refuse to do what they know is necessary – amend our immigration laws. Would immediately solve the problem! Mexico, with the strongest immigration laws in the World, refuses to help with illegal immigration & drugs!

Despite Trump’s campaign promises, Trump’s deputies are not using all their authority to stop the inflow, said Jessica Vaughan, policy director at the Center for Immigration Studies.

For example, Nielsen, McAleenan, and other agency officials say young migrants cannot be repatriated until Congress changes a far-reaching 2008 law, she said. But that “TVPRA” law is narrow and only covers victims of “severe trafficking,” such as prostitutes who are under the lethal control of international criminal gangs, she said.

In contrast, many of the young migrants are not covered by the 2008 law because they are being smuggled willingly — often by coyotes working under contracts with their parents. Under Nielsen, DHS officials are sticking with the far-reaching, pro-migration interpretation set by officials working for former President Barack Obama, she said.

The cross-border flow of children and youths — dubbed “UACs” — is also being protected by a clause in the 2019 budget that makes it difficult for enforcement officials to detect and deport the foreign parents who pay coyotes to deliver their children to the U.S. border agents. The parents pay for the delivery because they know the border agencies will relay the young migrants to temporary shelters run by the Department of Health and Human Services. The parents then pick up their children at the shelters by offering to “sponsor” them until a later court hearing. The UAC-smuggling clause was demanded by Democratic negotiators and approved in February by the GOP negotiators.

Nielsen’s statement did not blame Democrats but claimed instead Trump’s agencies and the pro-migration Democrats “have common cause.” She wrote:

We all want to enforce the laws of the United States, ensure a safe and orderly migrant flow, protect our communities, reduce the flow of drugs, facilitate legal trade and travel, secure our borders and support vulnerable populations.

Democrats say they are determined to counter what they view as Trump’s irresponsible fear­mongering over the security risks of the migrants and slow his push for a border wall. Experts have said the barrier would do little to stop the flow of Central Americans who seek to surrender to authorities in hopes of winning asylum protections.

In their fight, Democrats have pressed administration officials to acknowledge there is no emergency. During a Senate oversight hearing this month, Sen. Richard Blumenthal (D-Conn.) asserted that border crossings “are still at a historic low compared to other times in our nation’s history.”

Blumenthal then suggested that Congress pass a law to raise the inflow of foreign workers by repeating the industry-developed phrase: “fix our broken immigration system.” The Post reported:

“The Trump Administration is cooking the books to justify a vanity project that won’t keep Americans safe. The fact is we’re far closer to the lowest number of border apprehensions we’ve ever seen than the highest,” Blumenthal said in a statement. “I’ve long called for the Administration to step up and work with Congress to fix our broken immigration system and invest in strategic border security — but the Administration’s fraudulent fear-mongering does not work.”

In 2019 — because of catch-and-release rules mandated by Congress and the courts — the federal government also will likely release at least 350,000 migrant Central American laborers into the U.S. job market even as at least 500,000 more migrants sneak past U.S. border defenses or overstay their visas.

This federal policy of using legal and illegal migration to boost economic growth for investors shifts enormous wealth from young employees towards older investors by flooding the market with cheap white-collar graduates and blue-collar foreign labor.

But Trump’s “Hire American” policy has crimped the supply of new workers, so allowing blue-collar Americans to get a four percent wage increase in 2018.

Share This Post
Like it? Vote it up!
00
Previous ArticleThe Mueller Report Is Still an IndictmentNext ArticleAssault on America, Day 86: Mueller witch hunt showed nothing on media we didn’t already know
You May Also Like
Attorney General Barr Blocks Catch and Release by Migration Judges
April 17, 2019
Teacher had sex with boy in class as other student watched
February 27, 2019
Alt-Left: Black Bloc Antifa Attack Police at May Day 'Protests'
May 1, 2019
Where 2020 Stands as the Summer Recess Arrives
August 4, 2019
Poll: GOP Voters Say Border Wall, Reducing All Immigration Must be Top Priority for Trump
May 13, 2019
3 Key Facts About California's 'Medicare for Illegals' Plan
June 16, 2019

The Mueller Report Is Still an Indictment

WASHINGTON -- A thought experiment. Suppose that on March 24 -- the day Attorney General William Barr publicly summarized the Mueller report -- all of the results of the special counsel's probe that have dribbled out over the last two years had been revealed at once. Americans would have discovered that a