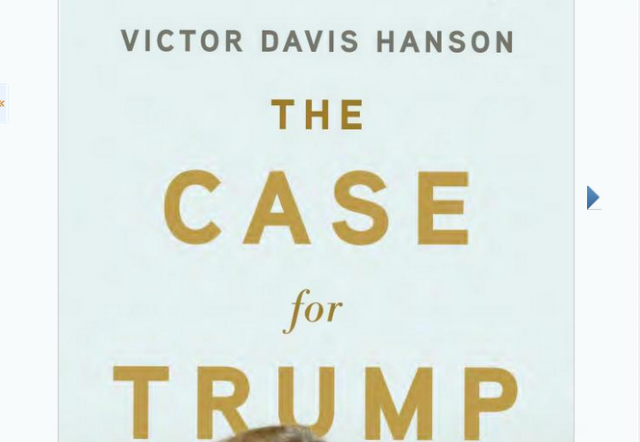 Earlier this month, I noted that Victor Davis Hanson, fellow Californian and a military historian at the Hoover Institution at Stanford University, had been targeted in social media by writers associated with The Bulwark.

His crime? Apparently, it was that Hanson had the temerity to write what he considered to be an even-handed review of President Donald Trump’s first two years in office entitled The Case for Trump.  The attack inspired me to purchase the book, and share my thoughts on it with Legal Insurrection.

I have often enjoyed Hanson’s columns on California because they are factual, thoughtful, and filled with references to classic works. The Case for Trump continues Hanson’s tradition of producing engaging and substantive political analysis.

The first part of the book covers the “Two Americas” and Trump’s path to the presidency.

While the rift between Red and Blue America has been covered in a number of other works, Hanson deftly analyzes how Trump took advantage of this division, exploiting it to gain both the Republican nomination and then the Oval Office. Hanson offers a compendium of examples of Trump’s appeal to “flyover country” in a succinct and entertaining matter, and he also notes how Hillary Clinton’s weaknesses as a candidate contributed to the 2016 election results.

There are any number of great passages to quote in The Case for Trump. For reasons that will be obvious to those who follow my posts, this one reviewing Trump’s knack for making those who attack him suffer is particularly savory:

It is hard to calibrate exactly why many of Trump’s targets fared poorly after their encounters with Trump, given the later’s usual greater viciousness. But there was a sort of mummy’s curse that followed his former adversaries long after the fact, as if the instigator of the dispute would not end well.

The second part of the book covers Trump’s time as president grappling with the existing structures of governmental power and coastal elites, which Hanson cleverly dubs The Ancien Régime. Hanson chronicles the lengths to which the Deep State went to reverse the results of the election, and the continuing resistance to the president from the Beltway, Hollywood, and the American press.

It is this second section that The Bulwark took exception to, as Hanson lays out the case for Trump’s economic policy successes, and details other wins for the president as well. However, there is also a look at some of his mistakes:

His past feuding with primary election rivals and present attacks on the anemic Republican congressional leadership (in early 2018, House Speaker Paul Ryan announced his intention to retire from Congress) vitiated any chance that Trump could count on 100 percent support from his Republican contingent. Yet such near absolute fealty was necessary to pass legislation, given Trump’s own failure in his first eighteen months to have achieved, for any sustained period, a 50 percent popularity rating.

I give “The Case for Trump” 5 stars, and I recommend it highly for both the political and historical analysis. Personally, I plan to add some of Hanson’s ancient history books to my collection soon and look forward to what he will write about the remainder of Trump’s time in the Oval Office.

Share This Post
Like it? Vote it up!
00
Previous ArticleBarbra Streisand: Michael Jackson’s Alleged Child Molestation Fulfilled His ‘Sexual Needs’Next ArticleNew Yorkers don’t have to …
You May Also Like
The Media's Shattered Credibility
April 20, 2019

Like It or Not, Disqualification Was Right Call
May 5, 2019

How to Get Back on Track on Improving Schools
May 7, 2019
Punk Rock Conservatism in the Age of Political Correctness
April 10, 2019
Yang Versus Beto: A Tale of Two Charismas
April 6, 2019

Actress Barbra Streisand made a series of bizarre comments about the child molestation allegations against pop legend Michael Jackson in a new interview, saying that children were "thrilled" to be with him. Source link