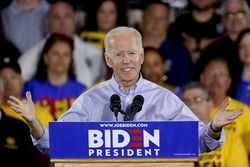 It wasn’t an accident that Joe Biden traveled to Pittsburgh for a speech this past week.

The city that birthed a precursor to the United Steelworkers was riveted together, appropriately enough, by unions. Its bridges and railways and skyscrapers were built from union-smelted steel. The political machinery, which has churned out reliable Democratic voters since the Great Depression, is similarly the product of union engineering.

Against this backdrop, the former vice president announced his plans for the presidency, telling workers packed into a local hiring hall that, just like them, he was labor.

“I make no apologies. I am a union man,” Biden told the crowd. “The country wasn’t built by Wall Street bankers, CEOs and hedge fund managers, it was built by you.”

The pitch was appropriate. The candidate who brands himself the blue-collar anti-Trump has rallied with grocers striking in Boston, won the endorsement of the International Association of Fire Fighters in Washington, D.C., and declared his candidacy in the labor-friendly Steel City.

The pitch was also strategic.

The three-time presidential candidate has put his White House hopes on the backs of organized labor. Though union muscle has atrophied over time, strength tests show it was significant enough to help Hillary Clinton win the Democratic nomination over Sen. Bernie Sanders in 2016.

Biden calls himself “middle-class Joe,” and is taking careful aim at the industrial Midwest with its unionized voters and which is, according to many analysts, the surest path leading Democrats back to the Oval Office.

For now, it is working. Three days after kicking off his campaign, for former senator is the undisputed favorite. According to the RealClearPolitics poll average, Biden enjoys an 18-percentage-point advantage over his nearest competitor, Sanders.

But Biden may have strayed from his union blueprint on Wednesday. “China is going to eat our lunch?” the freewheeling frontrunner told Iowa voters. “Come on, man!”

America’s chief geopolitical competitor wasn’t anything to worry about, he continued, because the leaders of that country “can’t figure out how they’re going to deal with the corruption that exists within the system. I mean, you know, they’re not bad folks, folks. But guess what? They’re not competition for us.”

The data says differently, however. China has grown into the second largest world economy and projections indicate it will overtake the United States within the next decade. Workers here, many of them unionized, have watched as factories that once hummed have packed up, moved across the Pacific, and set up shop in China.

Ahead of the 2016 election, and after watching mills close across the country, United Steelworkers International President Leo Gerard condemned the Chinese steel industry, dubbed it “outlaw steel,” and demanded Congress ban importation of its products.

“Forged with the despicable dividend of stolen trade secrets, priced with monopoly collusion, then traded with fraudulent labeling to dodge U.S. duties, steel from China violates every principle of capitalism,” Gerard argued.

Congress didn’t act but Trump apparently listened. The candidate railed against a rising China, singling out its steel industry for regular condemnation.

“We are going to put American-produced steel back into the backbone of our country,” Trump said less than a month before the election while touring a scrap-metal plant just outside Pittsburgh. “This alone will create massive numbers of jobs.”

“We have to bring back our workers,” he said during the final presidential debate. “You take a look at what’s happening to steel and the cost of steel, and China dumping vast amounts of steel all over the United States, which essentially is killing our steelworkers and our steel companies.”

Trump, of course, didn’t mention that his skyscrapers were built with foreign steel. He talked about a hollowed out industrial base instead. He threatened tariffs and trade war. He promised to get tough with China. To some extent, he’s followed through on those promises.

But unions didn’t walk out entirely on Hillary Clinton. Bosses endorsed her overwhelmingly. But many rank-and-file workers, who reliably voted Democratic for years, pulled the lever for Trump. Democrats still outperformed Republicans by more than 8 percentage points. But the victory was a feeble one, with Clinton’s union advantage the smallest since 1984 when Walter Mondale lost to Ronald Reagan.

With a strong economy and ongoing trade negotiations with China, the Trump campaign expects to improve on those union numbers next year. It also smells blood in the water, thanks to Biden’s comment this week.

“Joe Biden’s assertion that China is not an economic competitor shows a complete lack of understanding of China’s position in the world and decades-long bad actions,” Trump spokeswoman Kayleigh McEnany told RCP.

“Additionally, this once again underscores Biden’s complete betrayal of union workers across the nation,” she continued after listing the president’s work on addressing Chinese trade imbalances and before detailing the former vice president’s support of free trade agreements like NAFTA and TPP.

“Hard-working men and women in labor unions will remember this,” she concluded.

RCP emails seeking comment went unanswered by the AFL-CIO and the United Steelworkers. A representative from the United Auto Workers declined to comment put did pass along congressional testimony about how unfair Chinese competition has “caused a dramatic loss of U.S. Manufacturing Jobs, suppressed American wages, and potentially stifled wages.”

Share This Post
Like it? Vote it up!
00
Previous ArticleGM CEO Takes Less than Half a Percent Pay Cut Despite Mass LayoffsNext ArticleStanding Up for Realism–It’s Needed More Than Ever
You May Also Like
VA Owes $226 Million to Treasury Department, Inspector General Finds
November 29, 2017
Democrats Want to Restore Tax Break for the Wealthy
April 6, 2019

Which Mitch McConnell Will Show Up To Defend The Unborn?
February 7, 2019
Why Trump, U.S. Must Watch Central Park Trial Series
June 22, 2019
Klobuchar Pitches Herself as Heartland States Democrat: 'Look at What I've Done'
April 23, 2019

Standing Up for Realism--It's Needed More Than Ever

Henry Kissinger has noted that America may be the only country in which the term 'realist' can be used as a pejorative epithet, but realism is needed more than ever—and the Center for the National Interest will continue to promote it proudly.Read Full Article » Source link Veterans In Defense Of

General Motors (GM) CEO Mary Barra took a less than half a percent pay cut last year despite implementing a plan to lay off thousands of American workers, including closing four manufacturing plants in the United States. Barra, a close ally of the Obama administration and Democrat presidential candidate Joe Biden, closed