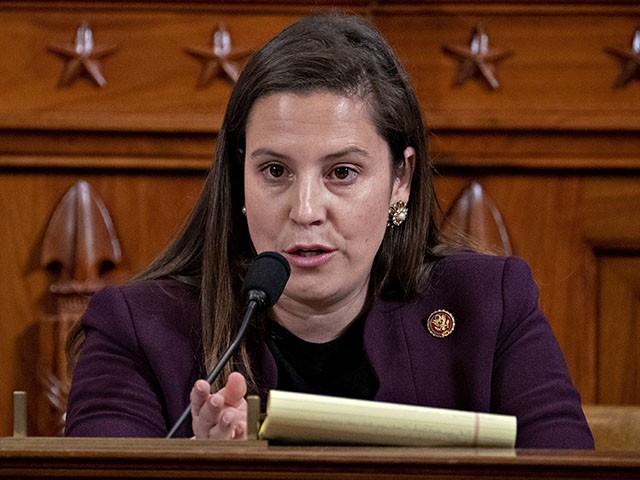 House Republican Conference Chair Elise Stefanik (R-NY) slammed President Joe Biden’s response to the Taliban terrorists talking over Afghanistan as “weak,” showing “he is unfit to serve as President of the United States.”

“President Joe Biden’s weak address to the American people shows he is unfit to serve as President of the United States,” Stefanik explained.

Stefanik mentioned that for six days, the president remained hidden from the world at his presidential retreat, “during the most significant foreign policy and national security failure in a generation.”

She added, Biden should have been leading the world “while the U.S. Embassy in Kabul was abandoned, the Taliban toppled the Afghan government, and tens of thousands of U.S. citizens and Afghans desperately rushed to the airport to be evacuated from Kabul.”

This is a “dereliction of duty” from the president, and his “deafening silence erodes our credibility to defend U.S. interests in the future.” She added:

On the precipice of the 20th Anniversary of September 11, the images of Biden’s failed and catastrophic withdrawal, including helicopters evacuating Americans from our U.S. embassy and Afghans clinging to U.S. military planes and falling from the skies, will forever be seared into the American psyche and will not soon be forgotten around the world. Because of Joe Biden’s weak and feckless leadership, the U.S. is less safe today than we were before he took office. Joe Biden has destroyed our credibility with our allies around the world and emboldened our adversaries like Russia, China, and terrorist groups on the march. This is Joe Biden’s Saigon.

Joe Biden is desperately attempting to pass the buck. But the buck always stops with the President of the United States. There is only one Commander-in-Chief. There is only one person who sits behind the Resolute Desk. The responsibility for this failure rests solely with President Joe Biden.

Stefanik, as the conference chair and a part of GOP leadership, stood up for former President Donald Trump by saying that the Afghanistan policy Trump created was conditions-based, and Biden, in his short eight months in office, has “totally abandoned that conditions-based requirement and allowed the Taliban to break the deal and essentially erase overnight two decades of American sacrifice, service, blood, and treasure. ”

“I am grateful to the soldiers and military families who selflessly served in Afghanistan over the past 20 years to protect U.S. national security interests,” she added. Stefanik is the congresswoman for Fort Drum and the 10th Mountain Division, which she added is the most deployed Army division since September 11, 2001.

“Your sacrifice will never, ever be forgotten by the American people. Joe Biden owes every American veteran an apology for his dereliction of duty and his shameful decision to desert the American people and our allies during this most critical time,” she added, talking about the fort and troops in her district.

Stefanik, sitting on the House Armed Services Committee and the House Permanent Select Committee on Intelligence, said she remains “committed to keeping America safe and secure,” adding that “the North Country will never forget the service of our troops, diplomats, and intelligence professionals who sacrificed so much in Afghanistan for over 20 years.”

Share This Post
Like it? Vote it up!
00
Previous ArticleJen Psaki Takes a Week of Vacation as Taliban Seizes AfghanistanNext ArticleYou would have never seen Trump on this flight
You May Also Like
The Black Gun Owner Next Door
March 12, 2019

You would have never seen Trump on this flight