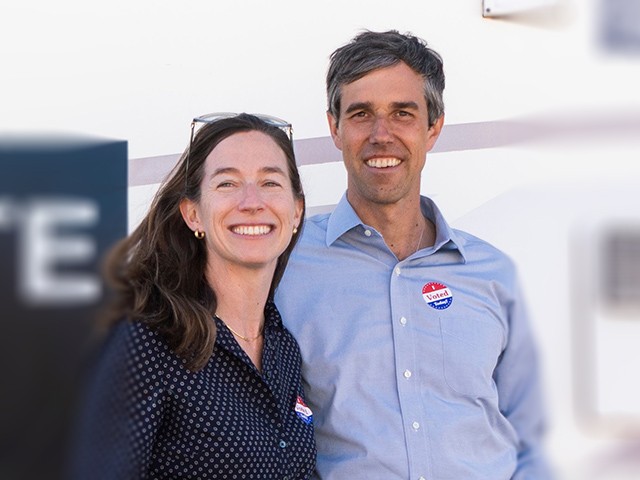 Former Rep. Robert Francis “Beto” O’Rourke (D-TX) on Thursday announced he is running for the Democratic nomination for President of the United States.

“The only way for us to live up to the promise of America is to give it our all and to give it for all of us,” O’Rourke said in a video announcement with his wife Amy Sanders O’Rourke by his side. “We saw the power of this in Texas.”

“This is going to be a positive campaign that seeks to bring out the very best from every single one of us, that seeks to unite a very divided country,” O’Rourke added. “We saw the power of this in Texas.”

In a glowing Vanity Fair profile released Wednesday evening, the former Texas congressman made several hints that he would seek the highest office in the land.

“You can probably tell that I want to run,” he told the magazine. “I do. I think I’d be good at it.”

O’Rourke is scheduled to visit Iowa in the following days for campaign events.

“It’s telling that the Democrats’ biggest star is someone whose biggest accomplishment is losing,” Michael Ahrens, Republican National Committee spokesman, Thursday morning. “Beto O’Rourke failed to get anything done in Congress, and with extreme policies like government-run health care and tearing down border barriers, his 2020 bid won’t be successful either.”

The former congressman rose to national prominence despite losing his bid to unseat incumbent Sen. Ted Cruz (R-TX) last November. O’Rourke said in recent days that he planned to make up his mind by the end of February about running for president. Speaking to reporters in his native El Paso this month, O’Rourke raised the possibility that he might run for Senate again in 2020, this time challenging incumbent Sen. John Cornyn (R-TX), or that he could possibly seek the 2020 Democrat vice presidential nomination — presumably by being another presidential candidate’s running mate.

However, advisers close to O’Rourke have said for months that they didn’t see another Senate run as a viable option, leaving the door open for a presidential bid.

Another contender expected to run is former Vice President Joe Biden, who recently said that his family supports him launching a White House bid and that he was “very close” to a decision.

While O’Rourke has continued to delay his decision, Democrat activists in states that hold early presidential voting contests, including Iowa, Nevada and South Carolina, have formed “Draft Beto” groups that have raised money and tried to line up would-be supporters.

In recent weeks, Draft Beto announced that it had created a “Beto Alert,” which will generate notifications by email and text message once O’Rourke makes his plans known, in order to “mobilize supporters right away.”

On immigration, O’Rourke has already positioned himself, in several respects, as the antithesis of President Trump, who made the issue the hallmark of both his 2016 campaign and his presidency.

In February, O’Rourke unveiled a 10-point plan which would grant citizenship for “Dreamers” and their parents, along with “millions more” who reside in the U.S. illegally. Brandon Rottinghaus, a political scientist at the University of Houston, told the Chronicle that O’Rourke’s proposal places him to the left of several Democrat presidential candidates  “That is fairly to the left of where most of the people in the Democratic field are,” Rottinghaus noted.

The plan also makes it more difficult for people in the U.S. illegally to migrate back home. “Here’s why,” the Texas Democrat began, “as we made it harder for people to cross into the United States, we made it less likely that once here they would attempt to go back to their home country. Fearing an increasingly militarized border, circular patterns of migration became linear.”

Some Texas Republicans say O’Rourke’s proposal is a slap in the face to U.S. citizens and those who immigrated legally.

“He is now showing even more how out of touch he is and how little he cares for American citizens and those who have followed the law to seek to become citizens,” James Dickey, Texas Republican Party Chairman, said. “Creating a whole new class of citizens whose status is a direct reward for breaking the law is just his latest dangerous extremist position.”

O’Rourke addressed thousands at a baseball diamond February 11 across the street from President Trump’s rally, denouncing border walls as ineffective and racist — even though his city has had some form of barrier separating it from neighboring Ciudad Juarez, Mexico, for decades.

O’Rourke later suggested on MSNBC that he would tear down El Paso’s walls. However, he later backtracked by saying that he supports physical barriers along some parts of the U.S.-Mexico border, saying that his past sentiments applied only to El Paso and were part of a larger argument that border walls haven’t made the city safer.

“I think there is a role for physical barriers in some places,” O’Rourke said. “I’m just as concerned about border security and safety as anyone. I live here. I’m raising my kids a short walk from the U.S.-Mexico border. But we won’t achieve that safety and security through walls.”

He said he’d work with landowners and local leaders in border communities and others who “actually live there” to determine where walls might work.

“Yes, let’s have security,” O’Rourke said. “Let’s have safety, but let’s do it intelligently.”

In an interview in 2006, he decried President George W. Bush’s proposal for bolstering the existing walls with more surveillance technology. Bush’s barrier “didn’t seem like a meaningful suggestion at all, but maybe that’s because we already have it and it doesn’t seem to be working,” he said.

While O’Rourke may have a plan to be the anti-Trump Donald Trump on immigration, some observers say the former Texas congressman may also need to cook up ways to keep himself from falling off voters’ radar as leading Democrat presidential candidates such as Sens. Kamala Harris (D-CA), Elizabeth Warren (D-MA) and Cory Booker (D-NJ) campaign heavily in key primary states.

“It seems like his star was fading,” Tim Hagle, a political scientist at the University of Iowa, told the Dallas Morning News. “That would be because he’s not in the news.”

The most recent Harvard CAPS/Harris poll places O’Rourke sixth among a slate of current or potential candidates. The poll, reported first by The Hill, shows Biden leading the pack, with 37 percent of Democrat voters. Sen. Bernie Sanders (I-VT) came in second place at 22 percent, while Harris notched a third place finished with 10 percent, according to the survey.

The Associated Press contributed to this report.

Pessimistic About Politics, Optimistic About America
March 15, 2019
Biden Coverage Dwarfed by Mueller Report on MSNBC, CNN
April 6, 2019
Yang Versus Beto: A Tale of Two Charismas
April 6, 2019
Trump Calls for Biden-China Probe After Schweizer ‘Secret Empires’ Revelations
May 18, 2019
Assume the Left Lies and You Will Discover the Truth: Reflections on the Trump-Russia Collusion Lie
March 26, 2019

The Most Troubled Debut in Modern Aviation History

Paul Roberts, Seattle TimesYou have to go back many decades to find the introduction of a commercial aircraft that has involved such a staggering loss of life, or has raised such uncertainties. Source link