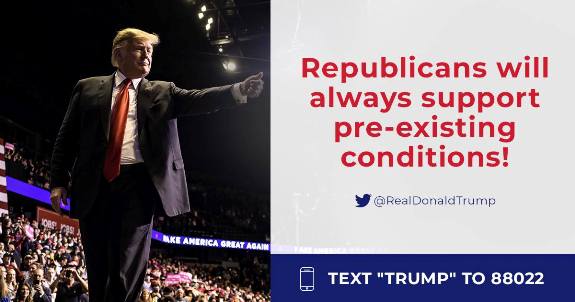 “No, Mr. President, we’re not gonna do it,” was Senate Majority Leader Mitch McConnell’s likely reply this week in response to President Trump’s suggestion that the upper chamber give repealing and replacing Obamacare another shot after failing miserably to do it (thank you, John McCain!) in the fall of 2017.

Cautious to the core, the turtle-like Kentucky establishmentarian was doubtlessly annoyed at the thought of having to muster his narrow majority to push through legislation that, even if it somehow broke through the opposition’s filibuster wall, had zero chance of surviving the Nancy Pelosi-led Democrat House. Such a move might satisfy those conservatives insisting Republican senators set markers ahead of the all-important 2020 election, but in the end a repeat effort to ditch the healthcare law would amount to little more than a wasted frontal assault against an impregnable Democrat fortress.

Doomed from the start with massive casualties, and for what? Militarily speaking it’s almost always superior to mount a surprise attack on the enemy’s flank instead… and that’s actually what Trump’s done here.

Nevertheless, some in the media acted flabbergasted at McConnell’s firm stand opposite Trump on healthcare and the southern border crisis. Susan Ferrechio reported at The Washington Examiner, “McConnell, R-Ky., who often acts as a strong advocate for Trump’s agenda, has been at odds with the president lately.

“McConnell said he talked to Trump on Monday about Trump’s renewed quest to replace Obamacare, which the GOP attempted but failed to accomplish in 2017 after months of effort. ‘I made it clear to him we were not going to be doing that in the Senate,’ … ‘He accepted that.’ …

“McConnell said he agrees with the president that ‘we certainly have a crisis at the border,’ where thousands of immigrants are crossing in to the United States daily in a new and growing surge of mass migration from Central America. But McConnell discouraged the president from following through on his threat to shut the border, which would stop commerce between the two countries. ‘I would hope we would not be doing that sort of thing,’ he said.”

Nothing to see here. McConnell was simply doing what he always does — waffle and worry about protecting his majority’s backside and hence avoid doing anything that intrudes on his wishy-washy political comfort zone. As alluded to above, it’s understandable why the majority leader hesitated to resurrect the Obamacare issue before the nation votes on a chief executive next year, but there isn’t a corresponding justification for not stepping forward to support Trump on the prospect of closing the border and addressing a situation seemingly getting more out-of-hand by the hour.

Yes, shutting off commerce between the United States and Mexico wouldn’t bring positive results for either side, but such a drastic move would undoubtedly be temporary and serve as a wakeup shout to Mexican authorities that the American president is dead serious about squelching the uninhibited flow of illegal contraband — human and otherwise — over the invisible line in the sand.

Why would McConnell backtrack simply over commerce interruption? Is trade more critical than national security and stopping crimes from occurring? What’s more important, a few days’ worth of goods or perhaps solving the aching decades-old dilemma of illegal crossings? Does one necessarily trump the other?

Needless to say the president’s border posturing was additionally directed at the Democrats to bolster his case for a national emergency declaration. Facts on the ground prove Trump correct, even to the point where Obama Homeland Security Secretary Jeh Johnson conceded Trump’s action was necessary. Can’t you just picture the consternation on Nancy Pelosi and creepy “Chucky” Schumer’s faces when one of their own agreed with Trump on the immigration issue?

Meanwhile, McConnell’s still smarting from the rebuke his own caucus dealt him (not Trump) on the president’s exercise of constitutional executive authority to divert military funds to construct the border wall. Since Democrats and a handful of wayward Republicans couldn’t override Trump’s veto in the House, no vote was called for in the senate. In time, those GOPers who originally joined Schumer and the 2020 Democrat presidential candidates to disapprove the declaration must answer for their cowardice.

In the meantime, immigration remains the hot topic of the moment and Trump obviously plans to keep it alive through warnings to close the border. The action probably wouldn’t be popular in the polls, but Trump understands the ebb and flow of politics.

Similarly, Trump’s bringing up the healthcare issue and the possibility of taking another Obamacare repeal vote was a political gesture. The first-time politician realizes Democrats will pound healthcare, healthcare, healthcare in their primary campaigns and the general election next year. They’ll demagogue Trump and Republicans to the nth degree in hopes of rousing an additional percentage point or two from the hopelessly gullible who just want free “stuff” and think Democrats will provide it.

With this in mind Trump launched a public relations campaign to dull the Democrat attacks before they even take shape, claiming the GOP is now the party of healthcare — and at the same time he’s softening the ground for introducing his own plan. In 2016, Trump’s content-heavy policy speeches established him as a substantive candidate with real ideas, many of which he’s implemented or is in the process of fulfillment. One area where Republicans fell short is ditching and replacing Obamacare.

It’s history now, but the late John McCain saw to the Republicans’ breakdown, switching his vote at the last minute to kill the “light repeal” sponsored by his friend Sen. Lindsey Graham. In a dramatic floor speech McCain then begged for a return to regular legislative order with committee hearings and bill mark-ups, etc., a nice idea but not practical in today’s contentious political environment. All McCain effectively accomplished was kicking the problems down the road for future congresses to deal with.

Such could be the case after 2020 as well if McConnell doesn’t grow a spine.

If Trump is eventually able to get McConnell and crew to implement his plan, it’ll definitely be an improvement over Obamacare. Betsy McCaughey wrote at The American Spectator, “Trump said the plan will be released after the 2020 election, but White House health experts have already put out reports suggesting what the Trump alternative will look like. The key pieces are a special fund for people with pre-existing conditions, allowing lower cost plans, and reforming Medicaid.

“The Trump administration wants to protect people with pre-existing conditions by duplicating nationwide what several states have done to fund coverage for the sick separately. That’s not abandoning the sick…

“Don’t believe the dire predictions. Trump’s reforms will enable millions priced out of Obamacare to buy insurance, while protecting people with pre-existing conditions and getting the scammers out of Medicaid.”

The best part is the plan will be sold by arguably the world’s greatest salesman, Donald J. Trump. Whereas the Democrat presidential candidates offer airy empty promises and assurances of “Medicare for All” — an impossible to implement fairytale — Trump counters with real know-how, time-tested experiences at the state level and enjoys the wind at his back from the multitude of successes his administration fostered.

Here’s thinking the roadblocks the reform effort encountered two years ago won’t be replicated the next time around. One of them, Paul Ryan, is safely back home in Wisconsin stewing over Trump’s dominance of the GOP and another, McCain, is playing harps at the entrance to the pearly gates. If reelected, Trump will have a mandate to make change, something even swamp-loving congressional establishment Republicans should respect.

By urging the senate to revisit the possibility of repealing and replacing Obamacare, President Trump made a political move to assure the public he hasn’t forgotten about the issue ahead of next year’s election. Ruling class Republicans and Democrats take note — Trump means what he says.

Share This Post
Like it? Vote it up!
00
Previous ArticleSalvini to Hold Conference to Unite Up to 20 Different European Populist PartiesNext ArticleEveryone Whose Head Is Screwed On Right Should Fight This Kind Of Thing
You May Also Like

Conservative social media aficionados are probably aware of the saga of “Victor” a MAGA hat wearing retiree who was accosted in a Palo Alto, California Starbucks by one Rebecca Parker Mankey, aged 46, who tried to incite a mob against him and run him out of the coffee shop. Mankey started

Populist Italian Interior Minister Matteo Salvini is set to host a conference in Milan next week aimed at uniting the European populist parties and movements ahead of the European Parliament elections. Source link Veterans In Defense Of Liberty - Vidol