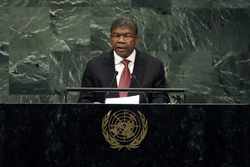 The U.S. sees Angola as an ally in Africa. Angola President Joao Lourenco has been given the benefit of the doubt that he will fulfill his promise to create a “new” Angola, despite its well-documented history of pervasive corruption.

President Lourenco should be given time, but after a year and a half in office he should be closer to achieving his anti-corruption, pro-transparency goals.

Recently, a group of Portuguese companies took the unusual step of publicly denouncing allegedly unlawful conduct by Angolan Finance Minister Augusto Archer de Sousa Mangueira. As a condition of paying the debts Angola owed to various Portuguese companies, Mangueira demanded that the companies pay 10 percent-to-15 percent of the total value of their debt as a “commission.” This was extortion plain and simple. In light of this abuse of power, the companies reasonably questioned whether it was credible to believe in the promises of the government and whether corruption is really ending under President Lourenco.

Separately, Angola’s Attorney General released Swiss-Angolan executive Jean-Claude de Bastos de Morais, who had been charged and incarcerated for alleged embezzlement of billions of dollars from the Angolan sovereign wealth fund. After the government managed to recover U.S.$3.35 billion that had previously “disappeared” from a U.S. $5 billion fund, Bastos de Morais was allowed to leave the country without facing trial. Such an approach to justice runs contrary to Angolan rule of law and belies any image of an independent judiciary or of a political system free of corrupt practices.

The Angolan Attorney General’s Office, which is expected to be leading the fight against corruption and safeguarding public institutions on which foreign companies and investors rely (such as corporate and property registries), also continues to employ and protect criminals acting against these interests. Among its victims is Africa Growth Corporation (AFGC), a U.S. public company that operates and invests in Sub-Saharan African nations to develop low- and moderate-income housing.

In 2017, senior Angolan government officials, including an Angolan State Prosecutor who remains employed by the Attorney General’s Office, expropriated Angolan real estate assets owned by AFGC valued at more than U.S. $55 million. These high-ranking Angolan officials transferred title to AFGC’s Angolan properties into their own names by utilizing bribery, intimidation and force of arms.

To date, Angola and its Attorney General refuse to uphold Angolan law and charge the Angolan government officials involved in these crimes. They also have taken no measures to reform those Angolan public institutions that have demonstrated contempt for due process owed to foreign companies and investors. In the case of AFGC, both Angola and its Deputy Attorney General entered into a settlement agreement in February that was endorsed by President Lourenco, only to have the government breach that agreement, and for President Lourenco to renege on his endorsement.

Angola’s pattern of unlawful conduct and its willingness to renege on its commitments to foreign investors and companies calls into serious question whether the Trump Administration and international lending institutions, such as the IMF, should continue to use U.S. taxpayer money to subsidize Angola’s kleptocracy.

The IMF should think carefully before it goes ahead with any more funding for Angola, a decision it will be making soon.

President Lourenco has yet to deliver on his promises of reform. Time may be running out. Foreign investors and companies want to see progress, not just public pronouncements, before they will be willing to overlook decades of Angolan government corruption and mismanagement. The U.S. government and others would be well advised to use the leverage they have to withhold support until they are assured that President Lourenco is creating a real, new Angola.

Scott Mortman is Executive Chair of Africa Growth Corporation. The views expressed are the author’s own.

How Family Breakdown Is Causing ‘Deaths of Despair’
October 3, 2019

Media Should Admit They Got Far Out Over Their Skis
April 18, 2019
Crosses in Italian Cemetery Covered to Avoid Offence to Other Religions
April 9, 2019

The Mueller Bait and Switch

Thanks to US Attorney General William Barr's "summary" of special counsel Robert Mueller's investigation of Russian interference in the 2016 election, President Donald Trump and most of the Republican Party can implant the idea in the mind of much of the public that Trump did nothing wrong. The truth will